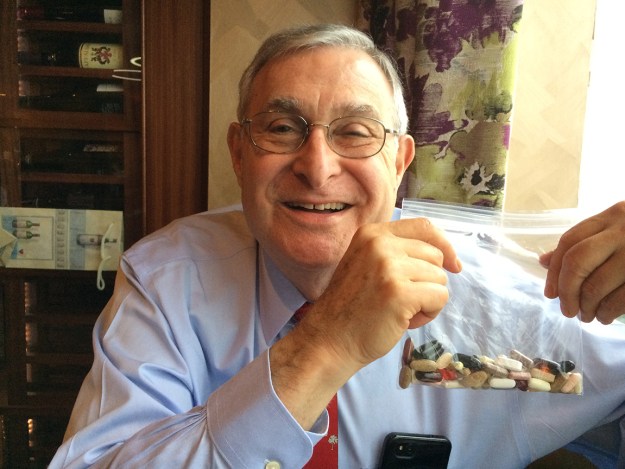 Years ago — probably well over a decade ago — I was having lunch with my good friend Samuel Tenenbaum, and he pulled a Ziploc sandwich bag out his pocket. It contained maybe a dozen or so pills and capsules of different colors, sizes, shapes and textures.

As he proposed to take them all, I asked about it, and he explained that they were various kinds of vitamins and minerals. He explained what each was for. He had researched each pill in sufficient detail that I was impressed, and after pondering it for awhile, started doing the same myself.

For several years, I was spending a remarkable amount at the Vitamin Shoppe, for… let’s see… vitamin C, a B complex, fish oil, calcium and vitamin D, zinc, iron (in those days, my iron occasionally fell short of the minimum when I tried to give blood), COQ 10 (someone had told me it helped brain function, which I figured I could use), some others I forget, and a multivitamin (just to cover any bases I had missed). I’d put them in a little plastic snack bag each morning, put that in my pocket as I left the house, and take them all during breakfast after I got downtown. Because they all say to “take with food.”

Then, over the last few years, I sort of fell out of the habit. I still have several bottles of various sorts in a kitchen cabinet, but only occasionally do I think even to take a multivitamin.

But some folks are more consistent than I. Samuel, for one. And then some.

On Friday morning, I was sitting down to eat at the usual place just as Samuel was preparing to leave after his second breakfast. It’s not that he’s a hobbit; if I remember correctly, he’s told me in the past he usually eats a little something at home when he gets up at 4:30 a.m. each day, then has a more sociable breakfast downtown hours later). 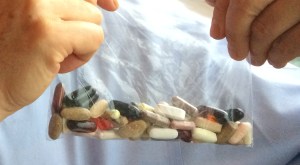 He joined me — so we could chat about my new job — and asked the waiter for a glass of water. Then he pulled out the bag you see at right. He had greatly expanded his vitamin-taking, to a phenomenal extent. At least, I hadn’t remembered there being that many before. He’s really pushed the envelope.

I was reminded of the time Dick Cavett took his show backstage at a Rolling Stones concert. He was chatting with Mick Jagger just before he went on stage, and someone started passing around a tray covered with various kinds of pills, which band members took as they chose. Cavett asked what they were and Jagger said “vitamins.” And salt pills. I thought that was meant as a joke. After all, it was the ’70s. But after seeing Jagger continue to shake it onstage decades longer than Jimmy Fallon predicted in “Almost Famous,” I suspect maybe they were vitamins…

Perceiving my interest, Samuel proceeded to rattle off what they all were as he took them several at a time. I wasn’t taking notes, but most of them I’d never heard of. I thought that if I start getting seriously back into vitamins, I’m going to have to study up on the latest things.

I asked him to let me take a picture of him and the pills, to share here on the blog. He said sure, and that I should tell everybody, “This is how you live to be 102!”

He could be onto something. He’s 10 years older than I am, and still going strong. So’s Mick Jagger, last I saw…