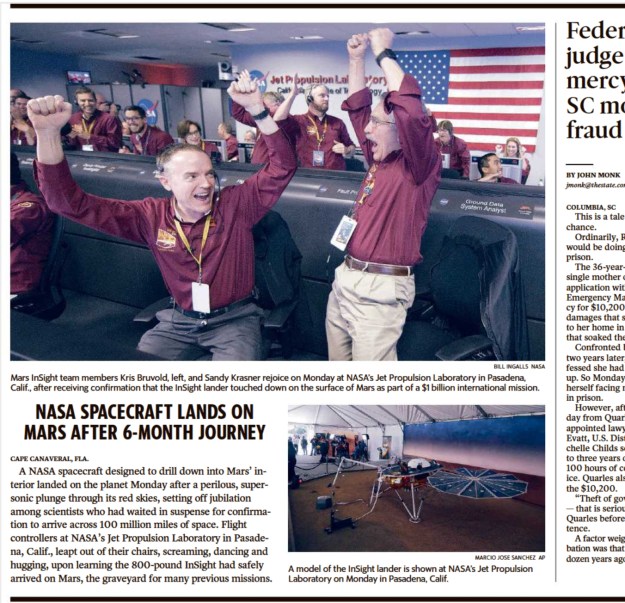 At least The State played it prominently…

There’s been little in the news to make us happy about being a member of the human race lately. I certainly wasn’t encouraged by the election result, as you can imagine. But the tawdriness, the discouragement goes far beyond that.

So it was nice to see us make a tiny bit of progress as a species earlier this week, with the successful descent and landing of our latest mechanical emissary to Mars.

No, it’s not as cool as if we’d actually send people there, but it’s something, however small. It shows us reaching out, growing, expanding out grasp and our consciousness beyond the cesspool that dominates our public conversation.

So I felt good about it, and looking back, I wish I’d seen more prominent coverage of it. No, I don’t expect everybody to be herded into the school auditorium to watch it live, the way we did upon John Glenn’s first flight when I was in 3rd grade. But I’d like to have seen more than I did.

At least my former newspaper played as the centerpiece on the front. That was nice, although I’d have appreciated a little more depth. And I’d like to have seen more celebration elsewhere, because lately there’s been so little for us humans to celebrate. Maybe it was there. Maybe I was just looking in the wrong direction…

2 thoughts on “Humanity took one small step forward this week”