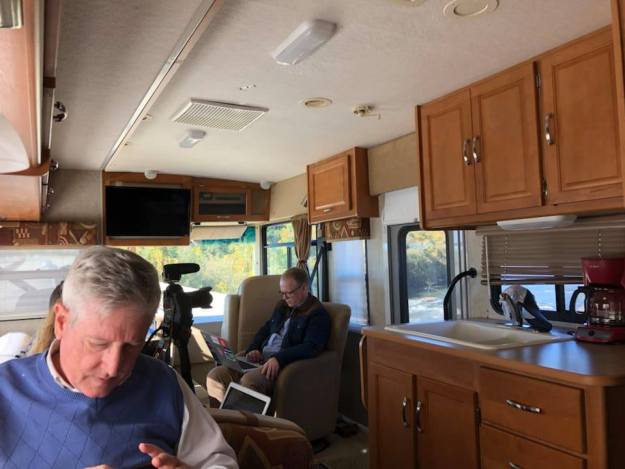 The only photo from the bus that shows me, since I was usually shooting the pics. Probably taken by Mandy. I appear to be engaged in some sort of incantation, probably pumping out a press release or a Tweet. In the background you see Jamie Lovegrove of the Post and Courier, so I’m guessing this was the first day on the bus, when I was still relatively sane.

Ken Kesey had one rule for the Merry Pranksters in their acid-fueled magical mystery tour across America in Furthur, the ultimate, aboriginal psychedelic bus: You’re either on the bus or you’re off the bus. As you may recall, I’ve used a variant of that as a tagline for this blog in the past.

With Kesey, it was both a practical admonition — if you’re not on the bus when we’re ready to go, we’ll leave you — and a sort of cosmic statement of connectedness, as he elaborated:

There are going to be times when we can’t wait for somebody. Now, you’re either on the bus or off the bus. If you’re on the bus, and you get left behind, then you’ll find it again. If you’re off the bus in the first place — then it won’t make a damn.

I spent the last week of the gubernatorial campaign on a borrowed RV — which we referred to often as not as “the bus” — that was decorated not with wild psychedelic swirls but with images of the candidates and gigantic representations of our bumper stickers and our tagline, “Leave No One Behind.” In a series of texts with the campaign manager at about 6 a.m. on our first day with the bus, I suggested we call it the “Leave No One Behind Tour,” and that’s what we did.

It was an intense experience. The whole campaign, of course, was an intense experience, unlike anything I’d ever been through, even in my newspaper days. The involvement, and the demand on my physical and mental stamina, was rather overwhelming. For the first month, I didn’t know if I’d make it. Then, I sort of started getting used to it. And then, the pace stepped up, and increased more and more until the end, but my body and nerves kept adjusting. A typical day would involve cranking out my first release by about 6:30 a.m. and continuing at a dizzying speed until fairly late at night — but that doesn’t really fully express it. At first, things would be a bit slower on weekends, but by the end, they were not — a Sunday became like a Wednesday, without end.

But those last days on the bus exceeded anything that went before. And as often as not, I was the only staffer on board for the whole day and into the night with James and Mandy. But as amazed as I am that I made it through, this was only a brief taste of what James, and later Mandy, had been enduring for the past year. For them, and for usual driver Scott Harriford — the first staffer hired way back in the summer of 2017 — the RV was probably more like a vacation.

But they’re all three a lot younger than I am. 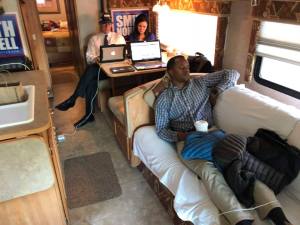 Scott Harriford, who had been The Driver for the last year-and-a-half, actually got some snooze time on the bus tour.

The incident I want to tell about happened the morning of Saturday, Nov. 3. But I’ll start with the day before.

We had a slow start on Friday, not rolling out from headquarters until about 8 a.m. I think that morning I even had a chance to run get breakfast at Cap City between pushing out the morning release and boarding the RV. Our first destination was a meeting with officials at Greenville Health System to talk about Medicaid expansion and other healthcare issues. Just one of many, many encouraging meetings J and M had had in the Upstate in recent months with folks some of y’all might expect to support Republicans. But you didn’t read about it because it was private and therefore I didn’t pump out social media about it. I just sat against the wall of the conference room and sort of half-listened, enjoying the break.

Then, it was off to Buffalo Wild Wings in the same city for a lunch meeting that Patrick Elswick (here’s video of Patrick) had set up with some veterans. Here’s social media about that. It was during that lunch that we learned Tom Hanks and Rita Wilson had given to the campaign, and I Tweeted about that, too. 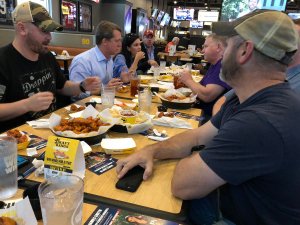 At Buffalo Wild Wings with the veterans.

At Wild Wings, I think, was where Campaign Manager Scott Hogan joined us. There had been certain… glitches… the day before, which we had blamed on inadequate advance work, and Phil Chambers had drafted a new schedule for advancing every single stop for the rest of the tour, and Scott had joined us to, among other things, see how that was working.

Next stop was an elementary school in Simpsonville. Since it was a public school, we couldn’t park in front of it, so we parked at a park about a mile away, and someone — Phil or one of the Scotts — drove them over in a car. I was delayed getting off the bus, and they were gone by the time I descended into the rain. But then I got tied up with a couple of supporters who had been attracted by the bus, who wanted to help — with signs, or something — so I got their contact info and arranged with their county coordinator to get with them, and got back on the bus. I had to use pictures shot by Harriford for the school event Tweet. I was for a moment flummoxed as to how to post a picture without showing kids’ faces, and Mandy just took a pic and edited out the kids who were facing the camera. Duh. I was getting punchy by then.

Then, on to a literal town hall meeting at Gray Court Town Hall. By this time, various Upstate media were joining us and we started a series of brief interviews. Tim Waller of WYFF would do two or three live feeds during the next hour or two. The town hall went well. Then, on the way back to the bus, we stopped at an antique store where J and M made a fun purchase — a circa-1940s Erector Set, which included a working motor. They showed it off in a video that I Tweeted. 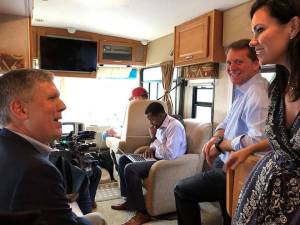 Tim Waller and crew rode back to Greenville on the bus.

Waller and crew rode back to Greenville on the bus. Then, James and Mandy spent three hours at the Greenville NAACP Freedom Fund Dinner. I spent most of that time catching up on stuff on the bus. Phil and the two Scotts went off in search of food, and eventually brought German, the driver, and me some excellent takeout — flatiron steak with tiny potatoes and lightly cooked green beans. Way better than my usual McDonald’s.

Sometime after 10, J and M got away from the banquet and headed for an informal gathering with friends and supporters at a downtown Greenville joint, Ink N Ivy. My old colleague Jim Hammond, who had been a huge help to the campaign, was there, and we chatted for a few minutes. But then I heard Hogan and Phil were going to make a breakout, leave the bus behind and head to Columbia. Matt Gassan, who had advanced the event, told me they were at the corner with the engine running. Tired as I was, the flesh being weak, and knowing the bus was scheduled to leave HQ the next morning at 7, I decided to escape with them….

… and found myself, half an hour later, on a godforsaken, wind-and-rainswept vacant lot in some part of Greenville I’d never be able to find again, helping put up a couple of gigantic campaign signs that Hogan and Phil were determined we should not leave unused back at HQ. Sure, I agreed that we were all determined to leave it all on the field in this race, but somewhere about this time, I privately decided they were both lunatics. Eventually, we headed back, getting home sometime well after midnight. I forget when. I then set my alarm for 6 a.m.

It would be much later that I would figure out what had happened. The thing is, I set my usual weekday alarm for 6. It just never occurred to me that the next day was Saturday.

At 7:39 a.m. the buzzing of my phone finally woke me. Multiple texts had been missed, and Hogan was voice-calling me. The bus was, finally, rolling away from HQ without me. Major panic on my part to say the least.

Hauling my old Volvo down two-lane roads I managed to catch up to them in Greenwood, in time to get some pics and Tweet about that first event. I then drove ahead to the next event, at a restaurant in Spartanburg. Ginger Crocker caught a ride with Noah Barker, who was advancing the lunch event — so she could drive my car back to Columbia and I could rejoin the bus, which I did, and we continued on another long, long day. 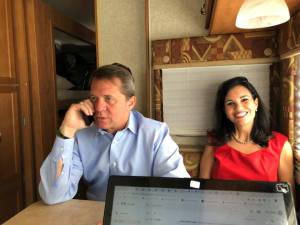 Then it occurred to Mandy what had happened to me…

All that day, I was perfectly mortified. I knew just what had happened, and I had been thinking the very same words about it all day. But very late in the day or that night, I was sitting across the little table from the candidates talking over the day, when the words occurred to Mandy and she said them out loud: “You got left behind by the Leave No One Behind Bus!”

James thought this was high-larious! He roared his appreciation of the irony.

Me, I didn’t think it was so funny. I had let down the side, and was full of self-reproach. And I resolved yet again to do a better job tomorrow than I had today… 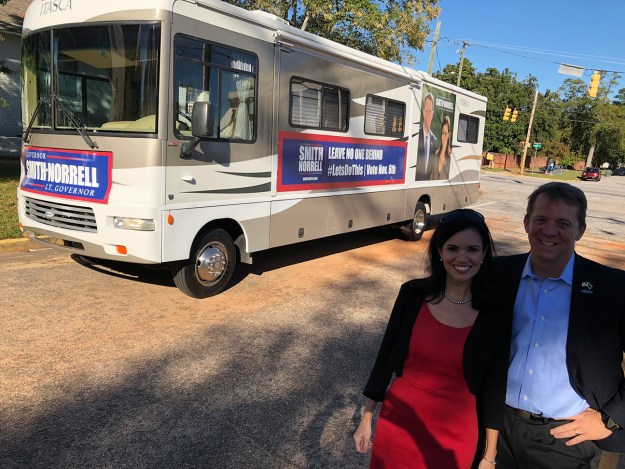 The first morning of that final tour. I was so intent on getting the bus in the frame I failed to notice J and M were in shadow. I did NOT Tweet this one…