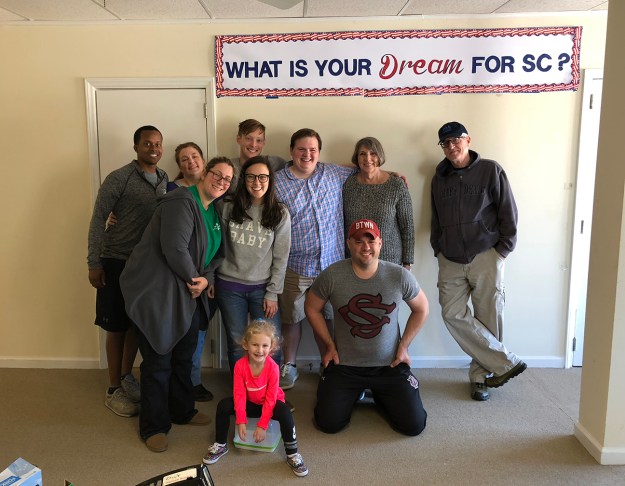 Phillip and Kathryn have already remarked upon a version of this photo, on Facebook. Said Phillip:

Brad looking extra cool and laid-back there off to the side, showing the youngsters how it’s done.

I was more helpful on Thursday, when we had dismantled and removed most of the furniture. I went through every sheet of paper in the random heap on my desk — actually, a bare-bones table from Ikea — and then dismantled the table, and left the pieces on the front porch where presumably someone was to pick them up. And did some other stuff, but mainly dealt with my own particularly chaotic space.

But when I got there Saturday, I was late, and everyone else seemed to have a task, and before I could get my bearings we were done, and posing for pictures. (The group you see above is more or less the core staff, with a volunteer or two. Some people who played a major role are missing, such as Phil Chambers.)

It wasn’t a total waste, though. Managing to look cool in the picture is in itself an accomplishment, right?

I’ll have more to say about the last few months, about what preceded the cleaning-out. But I’ll probably unpack it randomly, as a picture or a word or something in the news reminds me. My mind is still decompressing at the moment. All those months of intensity at an increasingly faster pace, culminating with those eight days and nights on the RV — it’s going to take time to process.

In the meantime, there’s the last picture. There will be more. I shot thousands… Below is one (that I did not shoot; this was done by a professional) showing some of the same people the day Joe Biden came to Charleston.

Between those two was the most intense part of the experience. The Biden thing seems in a way like yesterday, and in a way like 10 years ago… 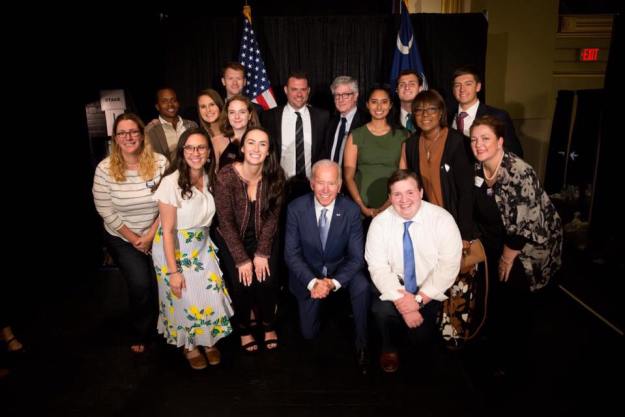 18 thoughts on “The last group picture”