In a comment on a previous post, Scout was talking about how James Smith did better than Democrats usually do in her Lexington County precinct. She went on to say:

James got significantly more votes than Sheheen did against Haley the first time around in actual vote numbers (not percentages), but the turnout was just bigger all around, so it still wasn’t enough.

It’s sort of a cliche that big turnout favors Democrats. Not this time.

One explanation I’ve heard is that the S.C. population is growing rapidly — and that a lot of the newcomers are people who don’t know squat about either Henry or James, but brought the habit of voting Republican along with them when they came here.

But obviously that’s not the whole answer. A lot of other factors were at work here.

For us on the Smith campaign, that outcome is counterintuitive. The lack of enthusiasm for Henry even among Republicans was palpable throughout this campaign. He barely squeaked by in a runoff in his own party’s primary, and was particularly weak in the Upstate — which is one reason why James did about 20 percentage points better than Vincent Sheheen had done in Greenville.

All over the state, we could see that almost no one wanted a McMaster sign in his front yard. My brother, who lives in a Republican neighborhood in Greenville, kept sending me pictures of Smith/Norrell signs next to signs for Republicans running for other offices. I thought maybe he was just noticing the things he wanted to see, but when I spent the day up there before the second debate and drove around looking, I saw the same thing — Smith signs everywhere, McMaster signs almost nonexistent. (And I’m not the kind of guy who fools himself into seeing only what pleases him. I’m hypercritical — always looking for the things that are WRONG — and attach great importance to bad news. Every McMaster sign I saw during the campaign was like a kick in the gut. But during all those months, I got very few kicks in the gut.)

It would be foolish to go by yard signs alone in trying to predict an outcome (so you can save your breath telling me that), but the McMaster sign deficit was so HUGE that I kept thinking it was a ruse of some sort. Maybe the McMaster campaign was deliberately holding the signs back, and they’d all go up in the last few days before Election Day to give him and his supporters a psychological boost, and discourage our voters. Or something. The lack of red signs was just weird.

(One day shortly after joined the campaign in July, I drove past the McMaster headquarters on Gadsden Street behind the governor’s mansion. The yard was full of signs, and I thought, so that’s where they all are! I almost did a blog post about it, but decided it would be unseemly given my role in the campaign. Anyway, I figured that sooner or later, I’d start seeing them scattered across the state in great profusion, and then I’d regret having made fun. But it never happened…)

Obviously, it seemed to us, we had the enthusiasm advantage. We weren’t counting our chickens or anything, because we knew the odds were always against a Democrat. But we had some things to feel good about. And the reason I’m talking about the sign thing, as insignificant as it it, is that it was something tangible I can point out to you.

It stood to reason that McMaster would get the votes of people who always voted Republican, but from what we could see, that was about it — and he wouldn’t get all of those (we were seeing and hearing a lot of indicators on that point). So how is it that there was both a big turnout, apparently with lots of people who had never voted for governor in previous years, and Henry still won?

It’s impossible to know for sure, but we can speculate… 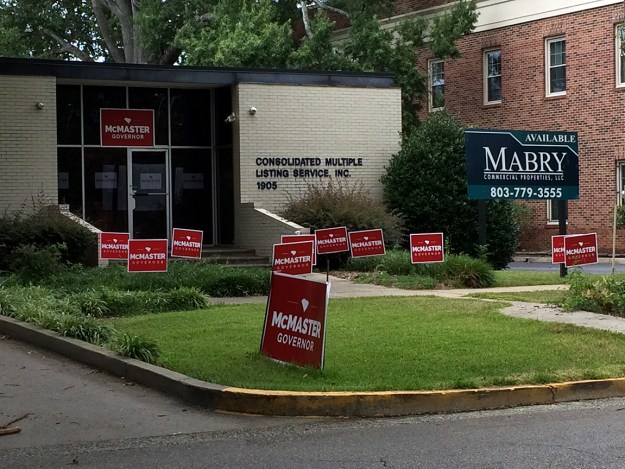 I took this photo on July 12. I thought, “So THAT’S where all the McMaster signs are — at his headquarters!”

32 thoughts on “Evidently, I was misreading the signs (or lack of them)…”