Don’t know if you’ve seen the above image, one of the headers I recently added to the randomized rotation.

It wouldn’t mean a thing to you, but it made me smile when I saw it pop up just now.

There you have four of the main political operatives of the Smith/Norrell campaign, at a tense moment: They’re watching the first debate, in Florence on Oct. 17. We’re in our green room backstage. There’s nothing they can do at this point but watch and listen intently. There they are:

I’m at the center of the room, between them and the TV monitor. I’m the one guy with something to do at this moment, with far too much to do, cranking out dozens of Tweets and making adjustments to the press release that I’ll put out within a minute or two of the debate’s end, working simultaneously with laptop, iPad and phone. I’m as busy as Butch and Sundance in that last scene where they’re shooting it out with the Bolivian Army.

But still, I take a moment to stand up in front of my table (you can see it in the uncropped version below) and look back at my comrades arrayed behind me, and feeling the need to record the moment, snap a quick exposure before sitting back down to my work and resuming the furious typing.

And the picture makes me smile now. Don’t know why. Maybe because things are going so well at that moment. James is clearly winning the debate, but there’s still that tension because there are 13 minutes left in the debate (photo taken at 7:47), and Something Can Always Go Wrong.

Maybe it makes me feel like Faulkner’s 14-year-old Southern boy, and we’re in the moments before Pickett’s Charge, and It’s Still Possible to Win, despite the odds.

And maybe I miss the intensity, the exhaustion tempered by the sense of mission, the excitement of this one-time experience, the feeling of doing all we can and leaving it on the field.

I don’t know. But while it’s no great masterpiece of photographic composition, it made me smile… 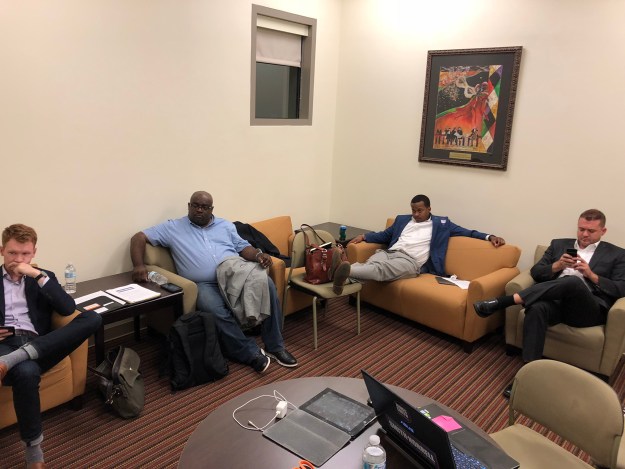