My response this morning to a headline about Nikki Haley may have come across as mocking, or at least facetious:

Me too, Nikki. I have trouble keeping the players straight: Cohen, Colson, Manafort, Magruder, Flynn, Stans… the names all run together… “Haley on the investigation into President Trump: ‘I’ve tuned it out’”https://t.co/CWs11Crdib

But the truth is, I HAVE been tuning it out. Or at least, not tuning it in.

Last night, I dropped in as usual to check on my parents, and they were doing something I never do — watching network TV news — and my mother said something about Cohen being sentenced to prison, while none of the others in all this mess had to do time… and I said I didn’t think that was right. I thought I’d heard the other day on the radio that someone had just finished serving a brief sentence and was getting out…

But I couldn’t name the guy. And I really wasn’t sure about it. It was something I had half-heard, without actively listening… although I tend to have good retention of stuff I heard without paying attention — it’s the secret to how I got through school. 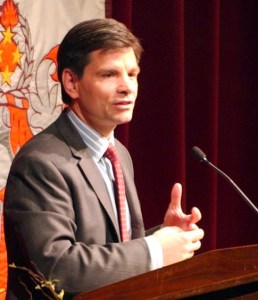 When I hear the name of the guy who just got out of jail, I picture this guy. So don’t go by me…

(For the purposes of this post, I did a little Googling. Apparently, four people have been sentenced to time behind bars. This was the guy who just got out, after a ridiculously short sentence — 12 days. I can’t tell you anything else about him. Whenever I hear his name, I picture this guy, so don’t go by me.)

Here’s the thing: The whole enterprise seems kind of pointless to me. I mean, I think the Mueller investigation needs to continue, for very serious reasons: We need to know all we can about the Russian effort to disrupt our elections — the 2016 one and especially future ones. We need to get a LOT more savvy about that stuff, and stop being so absurdly gullible as a people.

But I’m not terribly optimistic that that’s going to happen in a post-truth America.

And anyway, I sense that the reason other people pay so much attention to this investigation and its resultant prosecutions is that they think it has bearing on Donald Trump’s fate.

It doesn’t, near as I can can see. If you’re counting on, say, impeachment, dream on. Impeachment is a political act, and the Senate is in thrall to Trump. And even if the Dems had succeeded in capturing the Senate, impeachment would not have been a viable option. It probably would have exacerbated the sickness in our body politic that produced Trump.

That’s how low we have sunk as a country. And you might say my dropping of names of Watergate figures was an act of nostalgia on my part, a longing for a time when facts mattered, and the nation had standards.

I watched “All the President’s Men” again the other night. Such a wonderful film, on so many levels. The wistfulness I feel watching it goes far beyond remembering the days when newspapers were healthy and vital. It goes to a time when, if the public learned that people in and around high public office did bad things, that was it.

Once it reached the Oval Office, and the non-denial denials weren’t working any more, Nixon was toast. And being the master politician he was, he knew that. So he resigned. And in retrospect we can see that maybe he did so in part because of something missing today — a sense of honor, a wish to avoid putting the country through the trauma of impeachment.

We didn’t lose that all at once. It took time. And Democrats who congratulate themselves on still having standards should remember that 20 years ago one of their own did NOT resign, despite having been caught in impeachable acts, including brazenly lying to the American people.

Things are worse now, of course. Facts at least still mattered a bit in 1998. They don’t now, with a shockingly large portion of the electorate.

I appreciate what Mueller is trying to do, and I appreciate him, as sort of the last Boy Scout, a guy who still believes in the importance of facts.

26 thoughts on “No, seriously, Nikki: I’ve been tuning it out, too”