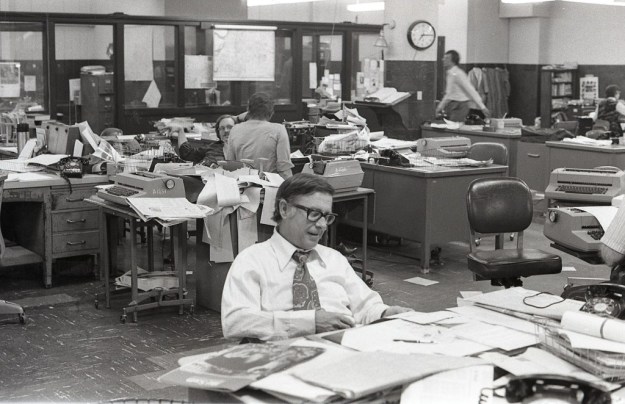 In 1974, the Memphis paper’s newsroom was still like a place where Ben Hecht would feel at home.

I tend to have little patience with populists who rant about corporations, from Bernie Sanders to Tucker Carlson.

But you know that thing Fitzgerald said about “he test of a first-rate intelligence (being) the ability to hold two opposed ideas in the mind at the same time?”

Well, personally, in my newspaper life, I never saw much good come out of the corporate offices. And I did my best to ignore them, because of a central truth about newspapers: They only had meaning as local players, as institutions vitally engaged with their communities. The purely financial relationship between papers and the corporations had nothing to do with the sacred relationship between papers and their readers. And I was determined to make sure the one in no way intruded into the other.

I was not alone in that, of course. And fortunately, the corporations that owned the papers I worked for respected that.

Those days are largely gone. Corporate looms much larger in the day-to-day existence of small-to-mid-sized newspapers, and the sense of place is much diminished, starting from the top, with senior editors and publishers who oversee several papers at a time, scattered across several cities.

Today, on a Facebook page created for journalists once employed by a newspaper at which I first started working 43 years ago, I noticed a shared news item from 2017 (the page doesn’t get a lot of activity) about the bigger paper down the road in Memphis, with the headline, “The Commercial Appeal seeks new home with digital forward attitude.”

Some of my former colleagues commented on remembering when the building the paper was abandoning was built, and seemed such a glittering modern creation. Me, I remember the ancient building before that one, where I had started my career as a copy clerk while still in school. The atmosphere was exactly like a set from “His Girl Friday,” or something else that would have been familiar to Ben Hecht. It was like stepping from the 1970s back into the ’30s, or ’20s — both architecturally and in terms of the working atmosphere. That was an atavistic bunch that worked there in 1974, bearing very little resemblance to the places I worked for the rest of my career.

But what I chose to comment on was the phrase, “digital forward attitude.”

A lot is gone from the old biz — the people, the money, the sense of mission — but we can clearly see that corporate B.S. is alive and well…

2 thoughts on “But take heart! Corporate B.S. is alive and well…”