“Time to Get Out of Afganistan” over the byline of Robert Kaplan grabbed my eye this morning. Of course, it did so in part because I’m one of the dummies who confuses him with Robert Kagan. But it was still interesting.

It starts out this way: 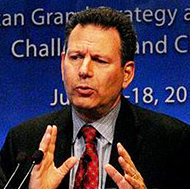 The decision by President Trump to withdraw 7,000 of the roughly 14,000 American troops left in Afghanistan, possibly by summer, has raised new concerns about his impulsive behavior, especially given his nearly simultaneous decision to pull out all American forces from Syria against the advice of Defense Secretary Jim Mattis. But the downsizing of the Afghan mission was probably inevitable. Indeed, it may soon be time for the United States to get out of the country altogether…

And then continues with words that sound like they should be read aloud by Peter Coyote, as I’ve been rewatching Ken Burns’ series on Vietnam during my morning workouts lately:

No other country in the world symbolizes the decline of the American empire as much as Afghanistan. There is virtually no possibility of a military victory over the Taliban and little chance of leaving behind a self-sustaining democracy — facts that Washington’s policy community has mostly been unable to accept….

Not only that, but he suggests that our efforts there, which provide a modicum of stability for the moment, are actually proving to be an advantage to the Chinese, Pakistanis, Indians and Iranians — allowing them to operate in the area with some safety at our expense — than they are to us and out interests.

But before we stark striking camp and heading for home, read what Kaplan writes further down:

An enterprising American diplomat, backed by a coherent administration, could try to organize an international peace conference involving Afghanistan and its neighbors, one focused on denying terrorist groups a base in South-Central Asia.

It is the kind of project that Henry Kissinger, Richard Holbrooke, James Baker III or George Shultz would have taken up in their day. But it is not something anyone can reasonably expect this administration, as chaotic, understaffed and incompetent as it is, to undertake, especially with the departure of Mr. Mattis….

9 thoughts on “Kaplan says it’s time to get out of Afghanistan. But there’s a catch”