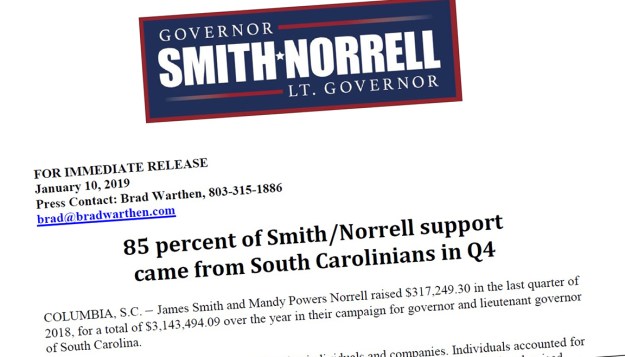 I was eating breakfast last Thursday, minding my own business, when the call came from Tom Barton of The State.

He said he thought maybe today was the day for campaign finance reports for Q4, and wondered when we might have our report ready.

I didn’t say “What?,” or “Why are you asking me?” or “Take a flying leap!” After all, whom else was he going to ask? So I shifted immediately back into campaign mode, and gave him the response I probably used the most during those four months: I told him I didn’t have the slightest idea, but I’d check and get back to him.

I soon learned that the deadline was today, although there was a five-day grace period, and that a couple of folks who had handled finance for the campaign were working on completing it.

This led to a flurry of multilateral communications via text that lasted all day and into the night. I just went back and counted: There were 64 of them, involving a total of seven people. Although the main communications involved one of the finance folks, James and Mandy and me. And James didn’t weigh in until the rest of us had things sorted out — which was smart.

In other words, it was just like being back on the trail, except more restful because we were only dealing with this one simple thing, instead of 10 or 20 things that made us want to tear our hair out.

The short version is that one of those texts gave me the figures I needed, I wrote a release, James and Mandy approved it, and after holding it for a couple of hours to see whether we wanted to react to anything in Henry’s report when they filed it (we didn’t), I dug up my campaign media address lists and sent it out to 200 and something media types, at 10:28 p.m.

But first, I texted Tom to tell him it was coming, since he was the one person who had asked.

I haven’t seen any reports on the filing, which is not surprising, because it’s not that interesting. (Perhaps I even DID see such a headline, and My Eyes Glazed Over.) But we did what was required.

It was kind of nice and sort of poignant to be working with everybody again, although on such a low-key level.

That’s probably my last release for the campaign, but who knows? I wasn’t expecting that one…

One thought on “Reactivated for campaign duty, for one brief moment…”