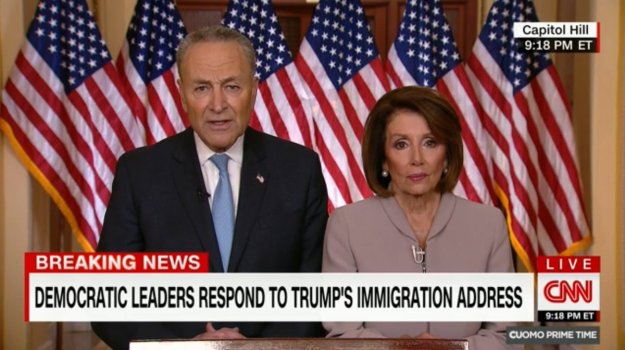 We knew all along that it would be extremely weird to see the strangest president in our nation’s history by far using his first live address from the Oval Office to try to convince us there’s a crisis on our border, and that it’s worth shutting down the government in order to implement his own preferred remedy for said nonexistent crisis.

Especially since we’d been conditioned all our lives to expect such addresses to be about something, you know, important. Like escalating the war in Vietnam, or killing bin Laden.

But there was an added weirdness bonus to the evening — Chuck Schumer and Nancy Pelosi doing a Siamese twins impersonation standing behind one small podium at the same time.

It was predicted that we’ll definitely see this odd visual on SNL this week, and there were some good shots on social media as well:

Meeting my wife’s parents for the first time. https://t.co/IWbRUy993B

Your mother and I love you very much but you’re just going to have to stay in jail overnight. pic.twitter.com/gVir3sjAqO

tonight was a waste of time for everyone but especially me since i just spent ten minutes doing this pic.twitter.com/vDPEHBeXjX

You know, we took a lot of criticism during the campaign for not separating James and Mandy more, but sheesh — at least they took turns at the microphone on their joint appearances….