James speaking at the event John Land hosted for us in Manning.

On the first day of the Leave No One Behind Tour, we had two reporters and a photographer on the bus with us.

One was Maayan Schechter of The State. Maayan wasn’t at the paper when John Land was in the Senate, but she knew his rep. And when we stopped in Manning for an event the senator had set up for us, she couldn’t resist asking him to talk about “liquor.”

She has not ceased being delighted by his willing response, as I learned when a “like” by Mandy Powers Norrell drew me to this Tweet, featuring video shot that day:

If you want to know more about the senator and likkah, you might want to watch this clip from several years back:

That, of course, was a tribute to this famous bit from Mississippi politician Noah S. “Soggy” Sweat, Jr. in 1952.

By the way, at one point another campaign aide and I had the same idea independently of each other, proving the old saw about great minds: We both thought it would be wonderful to get Land to play Henry in debate prep. Not just because of the accent, but because Land is so sharp that he’d really have given James a workout. We didn’t follow through on it, though. A shame. I’d love to have video of that. Imagine Land saying, “Ah like it, ah love it, ah want some mo’ OF it!” 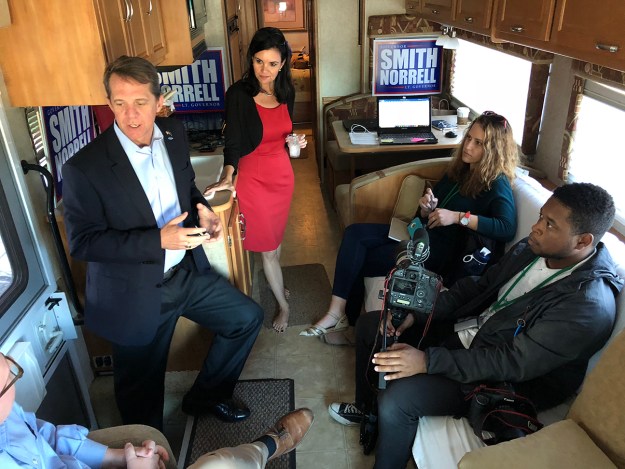 On the bus that same day. That’s Maayan sitting next to the photog over on the right.