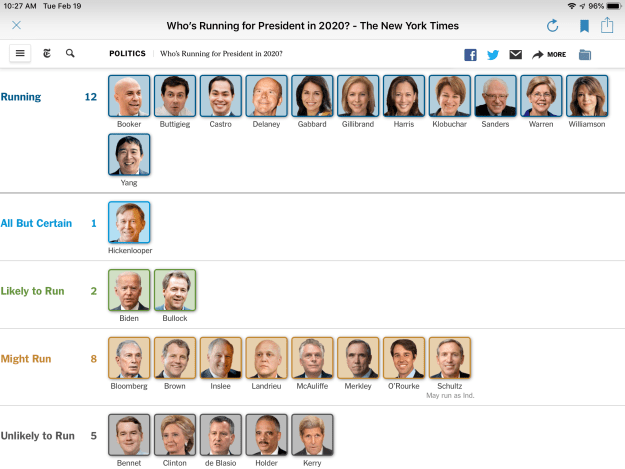 Anyway, I thought y’all might be interested in seeing the interactive graphic The New York Times has published showing the Democrats, or sort-of Democrats, who are definitely or maybe or possibly running for president next year.

(And no, the image above is not interactive. It’s just a screenshot from my iPad, although it links to the real one. The interactive one is here.)

Apparently, there’s a heap of hubris out there. All sorts of folks think they’re qualified to be POTUS, many of them on the thinnest possible grounds.

Personally, I’ve decided we need a good rule of thumb for winnowing the field, and I have gone ahead and come up with one, The country can thank me later. Here it is: No one younger than I am should be allowed to be president. Sure, that young fella Obama did pretty well, but we just can’t take chances with our country. Too much is at stake.

So, let’s see… the following youngsters are disqualified among those who are running or are likely: Booker, Buttigieg, Castro, Delaney, Gabbard, Gillibrand, Harris, Klobuchar, Yang, Bullock, Landrieu, McAuliffe, Merkley, O’Rourke.

I’ll figure out how to disqualify Sanders and Warren later. Hey, I didn’t claim my system was perfect. It’s just a starting point. I’ll continue to work on it until achieves my desired purpose of eliminating everyone other than Joe Biden.

(And no, Trump’s being older than I am doesn’t qualify him, since mentally and emotionally he’s about 3 years old.)

Anyway, as Bryan likes to say, your mileage may vary. 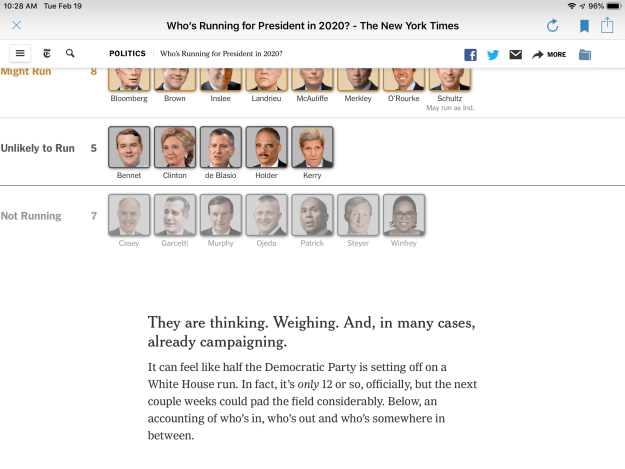 40 thoughts on “How about a graphic on who’s NOT running?”