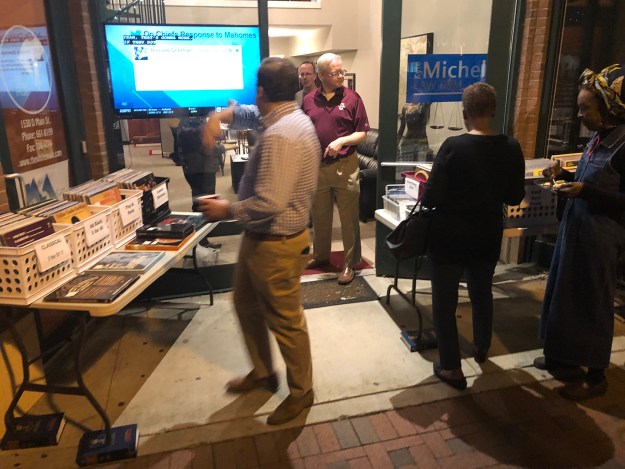 I did go check out First Thursday later. That’s Kyle in the doorway in the garnet shirt. That’s ex-Rep. Boyd Brown in the foreground with his head turned back.

I don’t know if I’ll stop by First Thursday on Main Street on my way home, but I always enjoy Kyle Michel’s oblique invitations to do so:

I stood out there and watched that lunar eclipse a couple of weeks ago. Cold night, clear sky and the moon just hanging up there bright and beautiful until the shadow slowly crept across, and then it turned that eerie red. Amazing.

Then you see all those awesome pictures of it and you think, how does that big chunk of rock just sit out there like that? What’s holding it up, anyway? Wait! What’s holding us up? Why doesn’t earth just fall? I mean, we weigh A LOT! And we’re sitting on nothing – like nothing nothing.

OK – so where does the gravity come from? Well, it’s generated by the mass of the celestial body. How? We’re not sure. Can you go touch the gravity? No. Where is the gravity located? It’s not really located anywhere it just happens. How do we even know this in the first place then? Truth be told, we don’t *know*, it’s just our best theory – you know Einstein and relativity and all that. And they’ve had to invent some new theories to layer on the old theories to make all the math work out. But it’s still shaky.

Some things are like those distant stars in the dark night sky – the more you focus on ’em the fuzzier they get. First Thursday, on the other hand, doesn’t require any focus at all and you can get as fuzzy as you want.

It’s just a bunch of people you forgot you knew caught in Main Street’s gravitational field circling around each other for a few hours in purely random order. No hard questions. No shaky theories. No math.

I walked by on my afternoon constitutional earlier and he hadn’t put the records out yet. As I’ve mentioned before, Kyle has the biggest collection of vintage records of anyone I know, rivaling Championship Vinyl itself, and he always puts a couple of tables laden with ones he’s willing to part with — for a modest price — out in front of his office on First Thursdays. 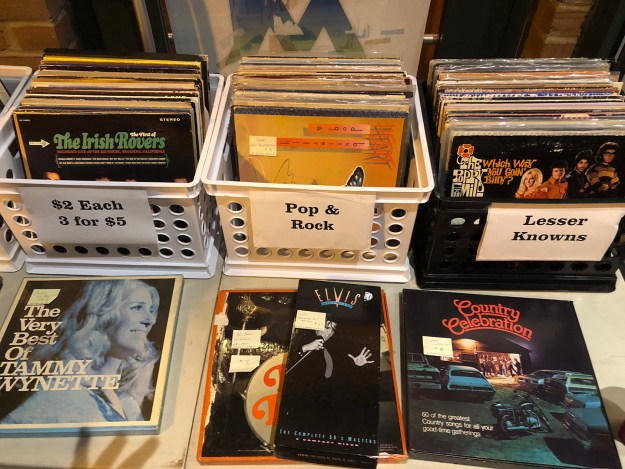 I ended up purchasing three albums from “3 for $5” bin.