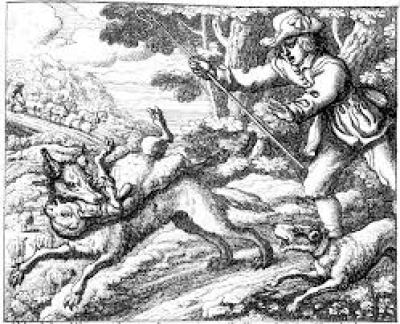 This is “the boy who cried wolf.” Not very self-explanatory, is it? Needs word balloons. Sorry. Best I could find.

There’s nothing stupider in political discourse than the game left and right play in trying to catch each other out for being hypocritical, or inconsistent, or unfair. I’m talking about the kind of J’Accuse! assertions that the ones asserting them think are devastating, but are persuasive to no one but the already brainwashed. These facile, leap-to-judgment “arguments,” generally found on social media, sort of make me feel ashamed to be a human in the 21st century.

I find it doubly irritating when news media are being unjustly accused of the above sins (this is from the right 90 percent of the time). But that’s me; your mileage may vary. (Sorry, Bryan — you hadn’t used that today, so I grabbed it.)

This is not even an extreme example, but it’s one at hand, so I share it:

Readers of the print edition of the Washington Post found not a word this morning about the charges brought last night against Jessie Smollett. The news broke about 8 p.m. Because democracy dies in darkness.

I had a number of thoughts in quick succession about this when it appeared the other day:

Personally, I like what the NYT‘s David Leonhardt said about cases such as this, two days before Hume’s Tweet:

Ms. Harris said in response to the question about her use of the ‘modern day lynching’ phrase,” as Katharine Seelye of The Times reported. “After a moment, she said, ‘I think the facts are still unfolding and I’m very concerned’ about the initial allegation by Mr. Smollett. She said ‘there should be an investigation’ and declined to comment further until it was complete.”

Her final instinct there was the best one. Making sweeping pronouncements about unverified criminal allegations isn’t a good idea — not now, not three weeks ago. It’s especially problematic with matters involving race, gender and sexuality, which ignite particular political passions.

Everyone — and definitely anyone running for president — should know by now that it’s O.K. to wait before weighing in on a hot topic. As the most recent Democratic president famously said, “I like to know what I’m talking about before I speak.”…

33 thoughts on “Oh, you mean the guy they say faked that attack?”