Here’s a release with a silly headline about a silly bill mocking something equally, you know, silly: 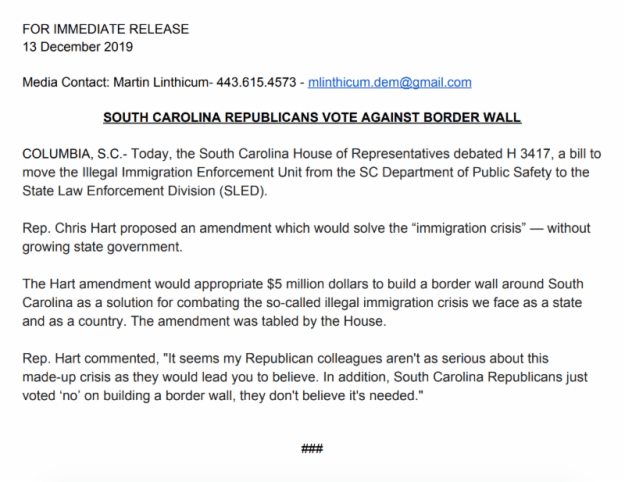 I only have one beef with it: I had to show you the release as a picture, rather than copying and pasting text, because it wasn’t sent in a text form.

Which is inconvenient. And irritating. And perhaps silly as well…

As to the merits of the measure that the Democrats are filibustering — I have no idea. Don’t know why Republicans are for it; don’t know why Democrats are against it. Don’t much care. Here’s a Tweet about it; that’s all I’ve got:

House Democrats are filibustering a bill that would move DPS’ immigration unit to SLED. Speaking from the well, Rep. Chris Hart of Columbia sarcastically suggests building a wall around the entire state of South Carolina to keep the immigrants out.

One thought on “Rep. Hart underlines silliness of the ‘wall’ nonissue”