I don’t see TV commercials much any more, and that’s a good thing. The awful thing about TV commercials historically was that you had to watch them, unless you wanted to turn off the tube or leave the room or change the channel, all of which meant risking missing the resumption of your show, which in the days before DVRs and such could be distressing. 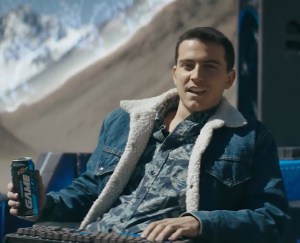 Who IS this simpleton? Why is he blowing stuff up?

The nice thing about print ads, comparatively, was that you could completely ignore them. You didn’t have to wade through them; didn’t have to wait through anything; you just looked right past them.

And the same is true of the descendants of traditional TV ads — video ads online.

But as my eyes glided over the one you see above, I couldn’t help taking in the words, “Winner winner, berry-flavored win sauce for dinner.” And that was SO stupid that I couldn’t help wonder about the video it went with. So I watched it — first without sound, then with.

It took me to depths of stupidity previously undreamed-of.

Really, what’s this about? “Victory in a can?” Victory over what? Who is this simpleton in an imaginary vehicle? Why is he firing what appears to be a missile containing cluster munitions at a flash of light on a mountainside? What’s his target? The Taliban? A peaceful village of llama herders? Supporters of a rival football team? What is the casus belli?

And what does this nonsensical activity have to do with Mountain Dew? And why would someone wish to imbibe “pure annihilation?”

We are offered no help; we are left to wonder…

12 thoughts on “Who are the ad wizards who came up with THIS one?”