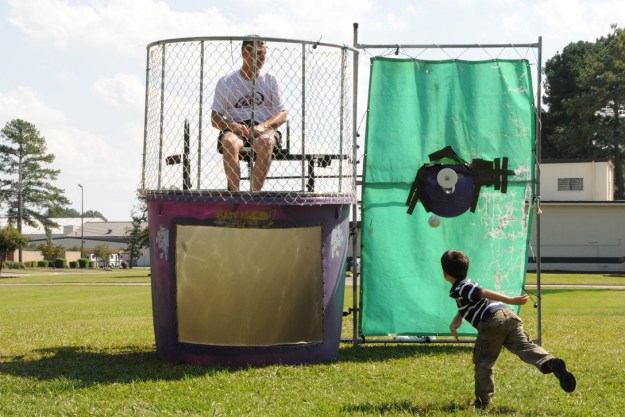 Doug keeps asking Bud how a “soak the rich” plan would work. (Yeah, they’re having that argument again.)

I thought I’d step in and help. I’ve got it all worked out:

Carnivals would be set up in each county across the country. Each one would feature a dunking booth. The richest people in each county would be placed, one at a time, on the seat in the booth. In large metropolitan areas, only billionaires would be used for this purpose. In the nation’s biggest markets, such as New York and Los Angeles, these would be famous billionaires. Mind you, we’re not just talking Jeff Bezos and Bill Gates, but some REALLY irresistible targets like, say, Kylie Jenner and Justin Bieber.

In Washington, it would be Trump in the booth.

Members of the middle class would be charged $100 a throw, folks below the poverty line only $20 (Doug will object to this approach, but he should reflect that if they can’t afford the $100, we don’t get anything). Some of them would be so eager, they would take out loans in order to throw until their arms wore out.

With the proceeds, we could have single payer.

We could have these carnivals periodically — say, once a month — and my next way to spend it would be on a 600-ship Navy.

Then, I’d start socking it away to save Social Security.

Oh, and we’d finally have those bases on the Moon and Mars I’ve been wanting.

The sky’s the limit. We’d be rolling in dough….

You don’t have to thank me. Just give me 1 percent of the proceeds. I’ll make do with that, and be content…

If we’re ever REALLY desperate for funds, we can take this approach.