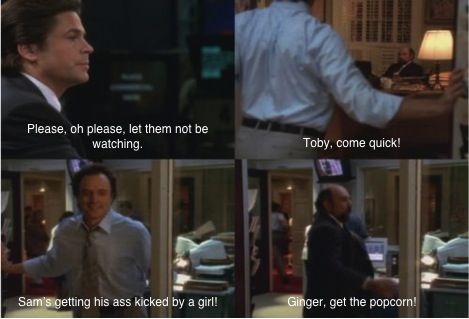 Since I did all that typing over on Twitter, I thought I’d share this exchange I had with Bryan.

It has to do with anyone getting their butt kicked. You’re construing the meme too narrowly.

I’m an originalist. I ask myself, “What was Sorkin’s meaning when he wrote it?” The Schadenfreude experienced by Josh, and quickly communicated to Toby, is in part based in the fact that Sam was being humiliated by someone toward whom he might have felt condescension…

… which is neatly and economically expressed in 3rd-grade playground terms. I submit that Toby would not have responded quite as enthusiastically had the key phrase “by a girl,” which completed Sam’s humiliation, been omitted…

… the humor is enhanced by the subtle inclusion of irony: Neither Josh nor Toby would wish to be seen by their peer group, particularly by C.J., as harboring attitudes that could, and certainly would, be construed as sexist. The joke is made complete with those three words… 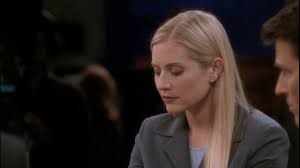 Ainsley, look all demure as she kicks Sam’s butt…

7 thoughts on “I’m a Sorkin originalist”