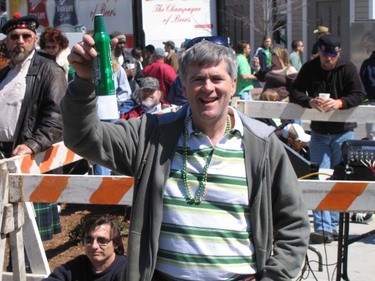 My brother-in-law, Patrick Cooper Phelan, in 2007.

As long as I’m wishing you appropriate holiday sentiments, I hope y’all all have a great St. Patrick’s Day. I see tickets are available for the Five Points bash, and you get a discount if you buy them in advance.

I urge you to go to Yesterday’s and buy one, have a pint and remember me to Duncan and my other friends there.

However, I won’t be joining you on the day of. I’ll be in Ireland.

See how I just reeled that off so casually, as though going to Ireland is a small thing that I do all the time? Well, it isn’t. I’ve never been before. But my colleen and I will be boarding a plane for Dublin a week from today, and we’re kind of excited about it. We’ll spend a couple of days there, and on St. Paddy’s Day we’ll be in Waterford, which is my wife’s ancestral home. She’s a Phelan, which is to say she’s an Ó Faoláin.

We have tacitly agreed that while in Waterford, I won’t mention my descent from the guy the hard cider is named after. Although while in Dublin I plan to quietly go to the National Gallery and see his wedding picture, which depicts his taking Irish Princess Aoife Ní Diarmait as his bride. (And if anyone asks me, I’ll stress that I’m just as much descended from her as I am from the Norman. Ahem. So don’t blame me.)

And it promises to be a great St. Patrick’s Day, because my wife’s brother and his wife will be with us. And the most fun I ever had at the Five Points celebration was in 2007, with that same brother-in-law.

Having the two Phelans with me should give me all the cred I need among the Irish. Or so I hope.

Anyway, I’m really looking forward to it. So much so that I started reading Ulysses a few weeks back, to get into the mood. But a couple of “chapters” in, I decided that was unnecessary, and that having read Dubliners is more than enough preparation….

7 thoughts on “Looking ahead: Have a nice St. Pat’s. I’ll be in Ireland”