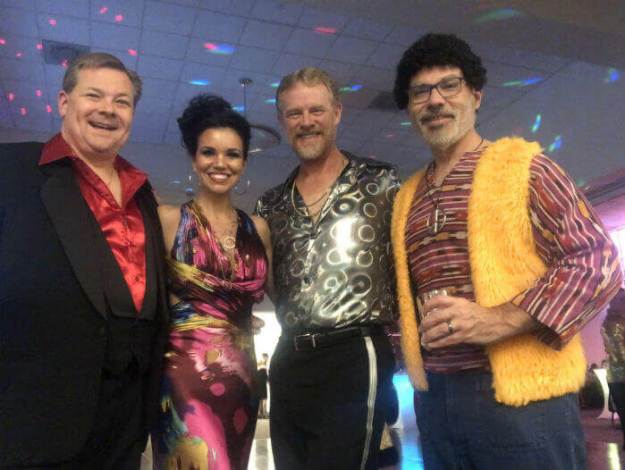 This is a recent shot from an event in Mandy’s home town. I think it was called “That ’70s Gala”…

No, it’s not me saying it. I would never say such a… I mean, not that I disagree!… I mean… well, I don’t quite know what to make of an article that describes my former boss in those terms.

But Mandy wants it to go viral, so I’m happy to help. Here’s the piece, in a publication called News Growl, and here’s an excerpt:

When it came time for South Carolina gubernatorial candidate James Smith to pick a running mate in May 2018, he chose fellow Democrat and South Carolina House member Mandy Powers Norrell.

What Smith did not say (but could have) is that he had found a running mate who also had an unusually keen sense of fashion and enough glamour to make a Kennedy blush….

It goes on in that vein.

For her part, Mandy was a bit bemused that her attire caused such a stir:

Okay I need some help making this go viral! I never imagined anyone would accuse me of being “glamorous,” but that’s a reputation I want to have! Of the outfits discussed in the article, two were hand-me-downs and two were Goodwill finds! https://t.co/W9XmwS6vPZ

Of course, Republicans get terribly envious when Democrats get such positive press, which is what I suppose stirred my own representative to respond:

I mean, it pretty much writes itself: “Caskey’s sartorial tastes range from bureaucratic gray to politiciany navy. Whatever the season, his off-the-shelf suits almost flatter his unflattering frame. In today’s world, where words don’t mean things, Caskey is redefining glamorous.” pic.twitter.com/RYv96ZQTbY

The jockeying for partisan advantage just never ceases, does it?

So I suppose that, as the communications director, I missed a major opportunity not making Mandy’s appearance a talking point in the campaign. No doubt if I had, it would have put her and James over the top. Well, it’s their fault, not mine — for hiring a campaign novice for such a crucial position. As I keep telling Doug: Experience counts!

One thought on “The ‘impossibly glamorous’ Mandy Powers Norrell”