Something I was working on this morning for ADCO — it had to do with family court law — got me to thinking about Tolstoy.

Congratulate me, because I managed, through great exertion, to restrain myself from quoting the first line of Anna Karenina in the copy I was writing for the client:

Happy families are all alike; every unhappy family is unhappy in its own way.

I knew that line, although I didn’t know it was in Anna Karenina. We were supposed to read that novel in one of my high school English classes, but I never did (although I can tell you what it’s about — I may have escaped reading it, but I couldn’t escape the class discussion). But I knew the line; it’s just one of those things you pick up over the years.

And I’ve always thought Tolstoy had it backwards. And Tolstoy’s own next paragraph (which I looked up just now) supports my position better than his: 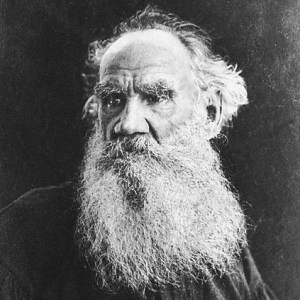 Everything was in confusion in the Oblonskys’ house. The wife had discovered that the husband was carrying on an intrigue with a French girl, who had been a governess in their family, and she had announced to her husband that she could not go on living in the same house with him. This position of affairs had now lasted three days, and not only the husband and wife themselves, but all the members of their family and household, were painfully conscious of it. Every person in the house felt that there was so sense in their living together, and that the stray people brought together by chance in any inn had more in common with one another than they, the members of the family and household of the Oblonskys. The wife did not leave her own room, the husband had not been at home for three days. The children ran wild all over the house; the English governess quarreled with the housekeeper, and wrote to a friend asking her to look out for a new situation for her; the man-cook had walked off the day before just at dinner time; the kitchen-maid, and the coachman had given warning.

Nicely written, but what a trite situation! This family is not “unhappy in its own way.” If you tried to come up with a cliche for how a family becomes unhappy, this would be it. It’s the very first thing anyone would think of. Infidelity. How original.

Whereas I think happy families have to find their own way to being happy. No family is perfect, so each person in it has to negotiate around all the things that are “wrong” in order to achieve harmony. Each person makes adjustments in his or her expectations; they make peace with the complexities of interpersonal relationships. And all those complex factors make for unique paths to happiness.

Of course, I suppose all that could be summarized simply with a word such as “forbearance” just as one could sum up the Oblonsky’s unhappiness with “infidelity.” But still, my point is that there’s no greater sameness among happy families than among unhappy ones. Among each set, there are both common and uncommon factors.

Now if he’d said, “Unhappy families are more interesting than happy families, if you’re a novelist,” I’d have gotten his point. Plot calls for conflict. But that’s not what he said. Or at least, that’s not the way it’s been translated.

The line is a good opener, like “It is a truth universally acknowledged, that a single man in possession of a good fortune, must be in want of a wife,” or “It was a bright cold day in April, and the clocks were striking thirteen.”

Others are more impressed by it. In fact, I learned today, it is the basis of something called “the Anna Karenina principle.” (Maybe I’d have learned it back in 1970 if I’d read the book. Or maybe not.) According to Wikipedia, it goes like this:

In other words: in order to be happy, a family must be successful with respect to every one of a range of criteria, including sexual attraction, money issues, parenting, religion, and relations with in-laws. Failure on only one of these counts leads to unhappiness. Thus, there are more ways for a family to be unhappy than happy.

In statistics, the term Anna Karenina principle is used to describe significance tests: there are any number of ways in which a dataset may violate the null hypothesisand only one in which all the assumptions are satisfied.

This principle is in fact used to explain all sorts of things. But I noticed something odd… there was no mention of “Goldilocks planets,” or the lack of such hospitable places. It seems that the rarity of planets that could sustain human life would be the perfect illustration of the Karenina principle: Everything has to be “just right” — gravity, temperature, atmosphere, chemical composition, distance from its star — to produce a “happy” planet where we could live. All planets that support human life would be remarkably alike. But fail in any one of a list of key criteria and, unhappily, you can’t live there.

Anyway, I failed to find on Google where anyone had pointed out the relationship between the two concepts. So I thought I would.

7 thoughts on “Anna Karenina and Goldilocks”