The State decided to run an “opinion” page today, which served the purpose of bringing to my attention this Doyle McManus column that The Los Angeles Times ran a week ago. An excerpt:

Pete Buttigieg, the 37-year-old mayor of South Bend, Ind., could turn out to be the biggest, boldest surprise of the 2020 presidential campaign. But he’d better come up with some policies first.

Buttigieg was virtually unknown outside his home state until two months ago, but he has surged into third place in polls in Iowa and New Hampshire…

That’s not an accident. He says voters aren’t looking for policy papers. They care about values and character, and knowing that a candidate cares about their lives….

I hold no particularly brief for Buttigieg. I’ve heard him on the radio and have found him surprisingly impressive, and I’m not at all shocked that he has risen in the polls in spite of his absurd youth and lack of relevant experience. 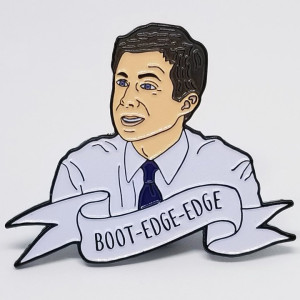 These pins are being offered by one Annie Fogarty, @FoGaGarty.

But y’all know my candidate is announcing tomorrow.

Still, I don’t like to see anyone taken to task for failing to make specific campaign promises.

As I’ve said many times before, I don’t want candidates making campaign promises, any more than they absolutely have to to get elected — and unfortunately they do have to, since most voters aren’t like me. (The Smith/Norrell campaign had some policy proposals out there before I joined. I did not push to elaborate upon them.) No one knows what kinds of situations a candidate might face in office if elected. I prefer that they keep their options open so they are free to choose the wisest course under those unpredictable circumstances.

My favorite example of why campaign promises are a terrible idea is “Read my lips: no new taxes.” Once in office, Bush found himself in a situation in which he found it advisable to compromise with Congress on a budget deal that in fact raised some existing taxes. That sank him politically. But acquiescing in a tax increase wasn’t his sin. His sin was in making the stupid promise to begin with.

So how do I choose a candidate? By the quality of his or her character, of course — at this moment in our history, considering what it in the White House, being a decent, honest human being is more important than ever.

Just as important is what we’ve seen that person do in the past, preferably in public service. It’s not just that such experience helps you know how to do the job. It’s that, if you have a significant record of such service, it means we the people have had the opportunity to observe how you have performed, and decide whether what we have seen inspires confidence that you will deal appropriately with future challenges in office, whatever they may be.

So to the extent Buttigieg has a problem in my book, it’s that lack of experience — in office, and in life. He’s an attractive candidate, but would be more so with more of a track record.

Just don’t get on his case for not laying out a bunch of specific policy proposals. To the extent that there’s a problem with him, that’s not it.