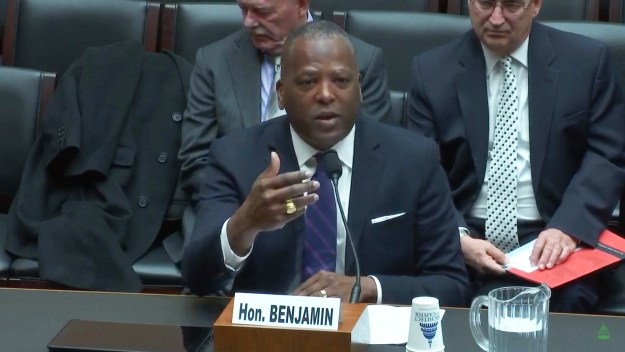 Mayor Steve Benjamin winds up his testimony before Congess.

I found this release in my In box, which said it was “happening now” — but I only got there as he was finishing his testimony. Maybe if I click on the link after the hearing’s over, I can see it from the start. Sometimes that works; sometimes it doesn’t.

In any case, here are his prepared remarks. And here’s the release:

Today, I’m in our nation’s capital testifying before the House Committee on Energy & Commerce Subcommittee on Environment & Climate Change at its hearing on how state and local leaders are responding to the climate crisis in the wake of President Trump’s intent to withdraw from the Paris Climate Agreement.

In my testimony, I will highlight the challenges Columbia has faced with flooding as a result of unprecedented wet weather events as well as how cities like ours have taken leadership in addressing the issue for our residents.

It is our hope that my testimony provides members of Congress with a strong understanding of cities’ efforts to address climate change as well as some ideas that they can quickly implement to bolster local government leadership.

If you’d like to watch the testimony – happening now – you can view it here: https://energycommerce.house.gov/committee-activity/hearings/hearing-on-lessons-from-across-the-nation-state-and-local-action-to.

If you’re wondering how he believes the city has “taken leadership” on the issue, here are some of the things noted in his prepared remarks:

In 2009, with assistance from the Energy Efficiency and Conservation Block Grant, we conducted an energy audit and implemented several of the audit’s recommendations, including upgrading lighting systems, HVAC upgrades on City buildings, and installing solar panels on fire stations. These projects reduced our greenhouse gas emissions and energy consumption and saved Columbia taxpayers approximately $337,000 per year.

In addition, one of my first priorities when I took office was to upgrade and rationalize our regional transit system to increase ridership, including successfully asking our voters to approve a penny tax dedicated to transportation, including transit. I have also built on and accelerated the efforts of my predecessor to improve pedestrian and bicycle infrastructure in Columbia, completing several streetscapes and extending and opening several trails. Combined with thousands of new units of housing in Downtown Columbia and other central Columbia neighborhoods, these efforts have set the stage for truly giving Columbia residents a meaningful option to the car, with the added bonus of a vibrant, lively and beautiful Downtown. Two years ago, Columbia took the next step, setting a target of powering our community with 100 percent clean, renewable energy by 2035.

In addition to our climate change prevention efforts, we have been actively addressing mitigation. In the wake of Hurricane Joaquin, it became clear that we had to accelerate our efforts to improve the climate resilience of our stormwater infrastructure. We bit the bullet and increased stormwater fees to fund a wide array of projects to improve our stormwater system using both gray and green infrastructure. We also issued our first-ever green bond that allowed the City to finance upgrades and improvements to our stormwater system while protecting our environment.

One thought on “Benjamin testifies before Congress on climate change”