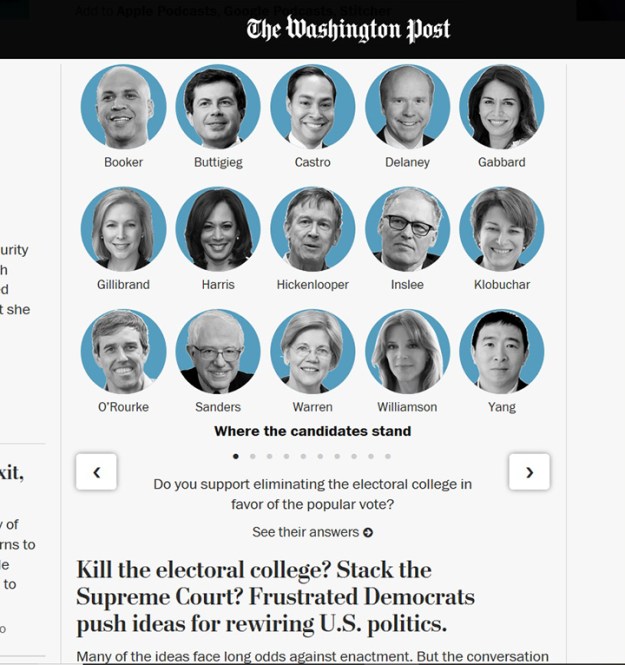 Joe Biden has the right idea, staying out of it so far. At least he hasn’t had to answer the Stupid Question of the Day. Not that he doesn’t get answered questions, and not that they aren’t awkward. But at least he doesn’t yet have to pick a position on no-win litmus-test questions.

At least, he didn’t in this story.

I was thinking that when I saw the above array of candidates, and noticed that Joe wasn’t pictured, despite being, you know, the front-runner in the polls. And then I looked at what the story was about and realized he lucked out there. The headline and a link: Kill the electoral college? Stack the Supreme Court? Frustrated Democrats push ideas for rewiring U.S. politics.

I have one overall answer to the questions being posed by and to Democrats: Stop trying to change the rules. If you can’t come up with a candidate who can beat Trump — under the present rules — then maybe you deserve to lose. Or maybe the country is so far gone that it can’t be saved anyway.

But just to show I don’t dodge the tough (but stupid) questions, here are my answers:

OK, so not all the questions are stupid. But most of them are. And even the ones that aren’t stupid tend to play stupid in our politics today, with answers being based on the passions of one crowd or another and not on reason.

Perhaps unfairly, I’m lumping in these questions with questions like “Do you want to abolish ICE?,” which I got asked during the campaign even though it had NOTHING to do with being governor, and everything to do with trying to back a candidate into a corner.

Maybe it’s an unfair association. But then again, since that pretended to be about an actual issue, maybe these questions are worse.

Anyway, tell me what sort of president you would be. Talk to me about some real issue — health care, or the real biggie, international relations. Or cite what it is in your background that qualifies you and make me trust you. Don’t bore me with talk about re-rigging elections themselves to try to give this or that group a greater advantage. Just play the game straight, please…

53 thoughts on “Dear Democrats: Stop talking about ways to rig the system; give me reasons to vote for you”