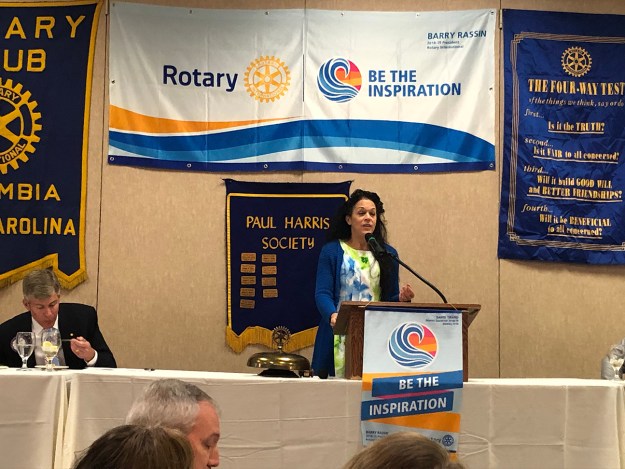 Two different members of my old Rotary Club invited me to come back as their guests today, because Cindi Scoppe was the speaker.

So I went. And she did great.

She addressed the questions people like us hear the most from laypeople. I forget how she stated them (What? You think I should take notes?), but they’re the questions like, What’s happening to my newspaper? Will it be here in the future? What does this mean for democracy? And so forth.

Originally when she agreed to speak on this date, she was unemployed after being laid off by The State. But before today rolled ’round, she had started with the Charleston paper. So one thing she did today was explain why Charleston is in hiring mode — not only that, but expanding its staff — when The State has now thrown its entire editorial department overboard.

It’s a simple answer, which she stated simply: The Post and Courier belongs to a family-owned company that is highly diversified and isn’t dependent on newspaper income to keep going. And The State belongs to a publicly-traded corporation that has to produce for shareholders.

Oh, and there’s one other critical element: The owners of the Charleston paper have resolved to use their advantageous position to produce good journalism as a public service to South Carolina. She said one of the last things she did in the interview process for the job was meet with Pierre Manigault, the member of the family who currently runs the business. And she thought then that whether she got the job or not, she felt blessed to have met someone with that intention, and the means of carrying it out. Because there aren’t many people possessing those two characteristics these days.

By the way, a digression… I noted above that The State “has now thrown its entire editorial department overboard.” That brings me to a form of the question I’ve heard uncounted times over the past decade…

People have asked me over and over, after saying how much they miss me from the paper, and how the paper is shrinking away to nothing, the following version of question Cindi was answering: “Do you think The State will still exist in five years?”

Until recently, I’ve answered that this way: Do you think the paper you knew five years ago still exists today? Which is a pedantic way of saying hey, things have already changed radically, so decide for yourself at which point you think the thing you think of as “the newspaper” ceases to be what it has meant to you.

But we’ve crossed a threshold now. As of the day Cindi was let go, The State ceased to be the paper it had been, with ups and downs, ever since the Gonzales brothers started it, intending it to be a paper with statewide impact that stood for something. (At the time, that meant standing against Tillmanism — a cause for which N.G. Gonzales gave his life.)

Newspapers have always mattered to me, and to the country — whether the country appreciates them or not. But when I say “newspaper,” I don’t necessarily mean a thing that is printed on sheets made of dead trees. In fact, as early as about 1980 — at the time when we made the transition from typewriters to mainframe — I fantasized about a day when I could just hit a button and have the copy go instantly to the reader in electronic form, as easily as I sent it over to the copy desk. No more tedious 19th-century manufacturing and delivery process taking hours between me and the reader.

And now that’s not only possible, it happens many times every day. But in far too many communities, the newspaper — meant the way I mean it, as an identifiable entity that plays a significant role in a community (no matter how its delivered) — is a thing of the past.

A newspaper, as I mean it, is a thing with a mind, a soul, a voice, an identity, a consciousness. It has things to say, and says them. It provides a forum for discussing public issues in a civil and productive manner.

And once a newspaper ceases to have an editorial voice, it’s not a newspaper, as I think of the concept.

You may have noticed that since Cindi has been gone, some days The State publishes an “opinion page” and some days it doesn’t. But frankly, does it matter? Because when it does, there are no editorials — just syndicated copy you can read elsewhere, and some letters. There’s nothing where the paper says, “Here’s what we think,” and invites you to say what you think back.

I say this not to run down the hard work that the good folks who still work at The State do, from the young reporters who now cover state politics (with whom I interacted a lot during the campaign) to the few remaining veterans like John Monk (who introduced Cindi today), Sammy Fretwell and Jeff Wilkinson. They’re working harder than ever, and producing information of value, and may they long continue to do so.

And I’m perfectly aware that the world is full of people — including a lot of journalists — who saw no value in the editorial page, who interacted with it no more deeply than to say, “Did you see what those idiots said today?” If that.

But at least the idiots said something. They didn’t just regurgitate what happened. They thought about it to the best of their feeble ability to think, and shared what they thought, and stood behind it. And that means a lot to me. I decided long ago, even before I left the news division to work on the editorial page back in 1994, that I preferred learning things from sources that had something to say about the subject at hand. It didn’t matter so much what they said about it — I might think their editorial point was totally off the mark — but they engaged the news on a different level, a deeper level, and they invited my lazy brain to do the same. That was more valuable to me than “straight” reporting, which by its nature engages the news on a more superficial level.

Also, you should know, in The State’s defense, that when it abandoned its editorial role last fall, it just joined the trend. When The Post and Courier contacted me to arrange James Smith’s endorsement interview with their editorial board, I thought I might as well start reaching out to other papers and arranging such meetings with them, too. Work, work, work. But as I did so, I had a creeping feeling there wouldn’t be any more such meetings. And I was right. I called The Greenville News. They told me they not only didn’t do endorsements any more, they didn’t do other editorials, either. Ditto with the Spartanburg Herald-Journal. I didn’t contact any smaller papers, figuring if they were exceptions to the rule, they’d reach out to me. I had plenty of other work to do, and it was — to someone like me, being who I am and valuing what I value — a singularly depressing exercise.

Anyway, Cindi did a great job, and represented the profession — the much diminished profession — in a way that did credit to us all. Even if very few of us are still around and employed, I’m glad she’s one of the few. But y’all probably already knew that… 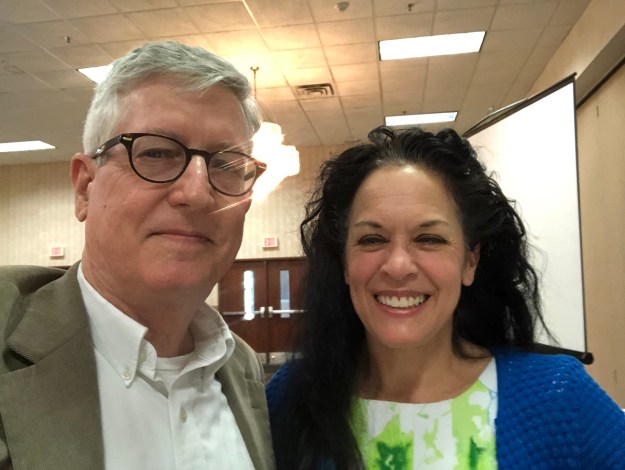