Yesterday, I was in Rock Hill on a video shoot for a client of ADCO.

When we had some time to break for lunch, Brian and I asked about where we might go eat where yours truly could find something I’m not allergic to. My best way of describing that sort of venue is “a meat and two veg place” — as opposed to a pizza place or a sandwich place, which have nothing on their menus for me. Basically, I need to go to a place that serves food like Mama used to make.

So we were sent to an old-school, down-home joint in an unremarkable strip shopping center.  It seemed that Fate was against our ever getting there, as Google Maps steered us completely wrong for awhile.

But Fate was just messing with us, just putting off the big reveal.

Earlier in the day, as we were pulling into town, I had thought to myself, “I know I was here during the campaign, but when, and what sort of event was it?” I couldn’t remember.

Now at lunchtime, as we finally turned into the shopping center parking lot and rolled past the Earth Fare that is sort of the anchor tenant, the lights came on and I said, “Oh. I know where we are.”

After we ordered our food (for me, a hamburger steak with fries and some speckled butter beans — with me, the plainer the fare the better), I stepped into the private meeting room toward the back and took the above picture.

Then I sent it to James and Mandy along with the picture below, saying, “Having lunch at The Little Cafe in Rock Hill, and having flashbacks.”

We zipped in and out of these places so fast that they’re hard to recall now — until Fate decides to mess with me, dropping me into a place apparently at random and then saying, “Remember this?” 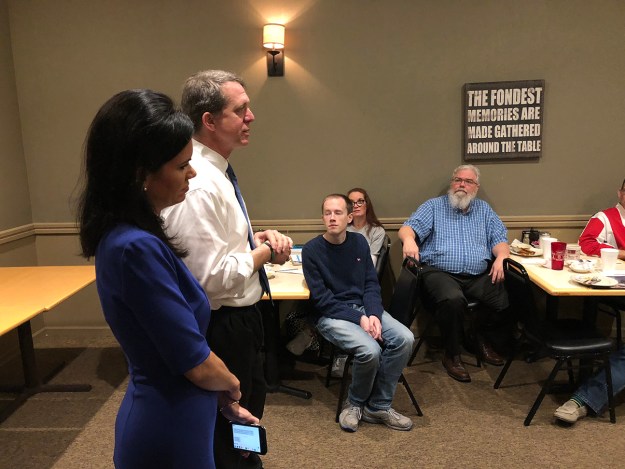 4 thoughts on “I keep having these campaign flashbacks”