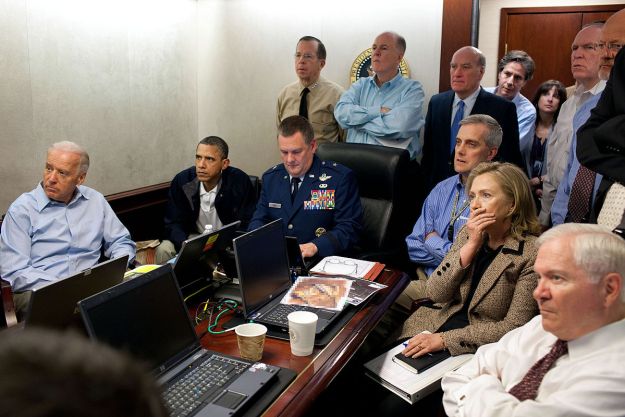 Yesterday, Bud said “This year there is an embarrassment of riches among the Dems,” just before listing 18 people running for president.

I’m glad he’s pumped about it, and that’s certainly a bunch of names, but the fact is that until Joe Biden entered his name today, there wasn’t anyone who was even close to being ready for the job.

There is no one else who has been anywhere near the presidency or who has held any kind of position that prepares one for the presidency the way 36 years in the U.S. Senate and eight years at the right hand of our nation’s last sane, decent president do.

When I got to thinking about how to graphically demonstrate that fact, I thought of this picture.

I’m not saying Joe Biden went out and got bin Laden personally. I’m not saying he’s doing anything special in that picture. I’m saying that he happens to be in the room because of who he is, because of what he’s done, because of his experience and personal leadership qualities. His life experiences brought him to that room at that moment.

And those experiences — combined with his basic human decency, which is a quality more needed at this moment than at any other in our history — make him qualified to be president of the United States.

And yeah, Hillary Clinton was qualified, too. She was a pretty good secretary of state — not to mention the eight years she spent at the center of presidential power before that.

But she was a terrible candidate, badly lacking in the ability to relate to voters.

I think Joe will be different in that regard, if he’s not brought down by a million cuts by all the Lilliputians out there.

He’s a natural campaigner. And a decent human being.

But most of all, he’s the only person who is even remotely qualified. And the best person to replace the least qualified, least decent president in our history, by far.