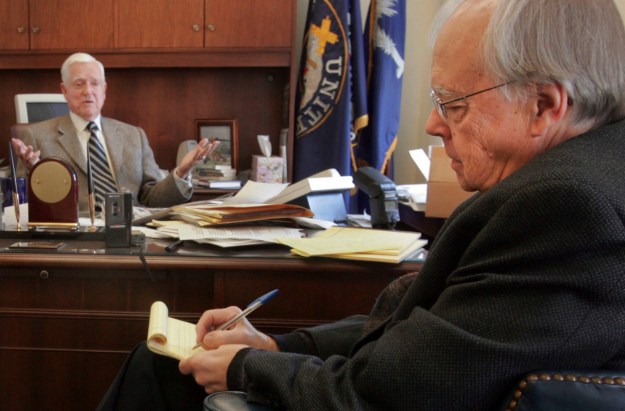 Two great South Carolinians: Fritz Hollings and Lee Bandy. Fritz is probably castigating Lee for what he called ‘the Bandy Hurdle,’ and Lee is letting it roll off his back.

I was awakened Saturday morning by a notification on my iPhone — Fritz Hollings had died. I didn’t get around to writing something about it that day, or the next day, or the next, because it just seemed like too big a task.

And it was too big a task, remembering Fritz and what he meant to me and other South Carolinians. And I don’t have time to undertake it today, either. So here are some scattered thoughts, rather than a coherent whole:

I’ve got to get back to work. And when I go home tonight, I need to get back to reading Ron Chernow’s book on Alexander Hamilton. I originally got that book because Fritz called (about something else, probably one of his opeds) and told me how wonderful it was, way back when I was still at the paper. Least I can do in the senator’s memory is finish it…