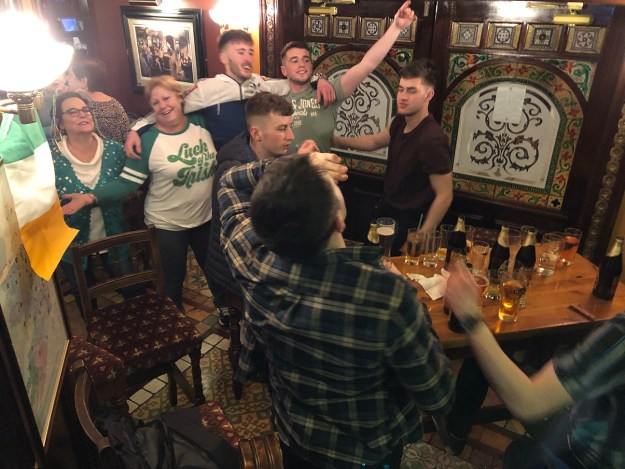 Of course, the threat of Brexit didn’t keep us from having plenty of craic. Here a couple of ladies from our group celebrate with some local lads on the evening of March 17.

While we were in Ireland recently (March 13-22), we didn’t follow news all that closely — and we never let it spoil our fun — but we were aware that the biggest story in the Republic’s media was Brexit. Not just because it was a big drama playing out right next door, but because it was an issue with ominous implications for Ireland itself.

It might even, we kept hearing, bring back the Troubles. Here’s a fairly succinct description of the situation:

Brexit, in its most basic sense, means that the United Kingdom of Great Britain and Northern Ireland will exit from the European Union and, as voters in the 2016 Brexit referendum were told, will “take control” of its border. Brexiteers promised that the U.K. would be able to restrict the free movement of goods and people—thus abandoning the central commitment of E.U. countries—and discard E.U. regulations.

But the U.K.’s borders also draw a line between Northern Ireland and the Republic of Ireland, which is—and will remain—a member of the E.U. The Irish border meanders for some three hundred miles through towns, villages, and the countryside, separating twenty-six counties in the Republic from six counties in the North—a division that emerged from the Irish War of Independence and the creation of the Irish Free State, in 1922.

Here’s the problem: the U.K. and the Republic of Ireland are parties to the 1998 Good Friday Agreement, which relies on the absence of a hard border on the island of Ireland. For example, the accords created common Irish cross-border institutions, such as a joint parliamentary association, and removed the checkpoints and watchtowers at which British soldiers had been stationed during three decades of strife known as the Troubles. During those years—chronicled in Patrick Radden Keefe’s new book, “Say Nothing”—the Irish Republican Army conducted a violent campaign to push the British out of Northern Ireland; unionist paramilitary groups, whose goal was to remain part of the U.K., committed their own acts of violence; and British forces were frequently complicit with the unionist paramilitaries and, at times, engaged in torture and illegal killings. Sinn Féin, the political party associated with the I.R.A., is also a party to the Good Friday Agreement, as are parties associated with unionist paramilitary organizations. The accords have worked, bringing peace.

This is the paradox and the tragedy: Brexit fundamentally conflicts with the Good Friday Agreement, but the U.K. government is in a state of denial about that conflict. It insists that it is committed both to Brexit and to the peace accord: Brexiteers claim that they can maintain a “frictionless” open border with the Republic of Ireland after Brexit—in the same place that the newly hardened border with the E.U. will be….

Ireland doesn’t need that kind of tension on its border with Ulster, a place that will be freshly seething over what Britain has wrought upon them. Britain doesn’t either. Yet the U.K. keeps staggering toward what increasingly looks like a ragged, disorganized exit, with little provision made for the aftermath. That’s what government by referendum gets you.

I thoroughly enjoyed visiting that beautiful country, and hope and pray its future isn’t like its past. That past was always with us, and not just because of our tour manager, a bluff, ruddy Englishman who sometimes seemed to forget that this American tour group contained a healthy proportion of Irish Catholics (you’d think my brother-in-law’s name, Patrick Cooper Phelan, would have been a reminder to him). He made a number of references to the IRA, only he always said “IRA terrorists.”

But that’s nothing compared to the carelessness of his countrymen who voted for Brexit. 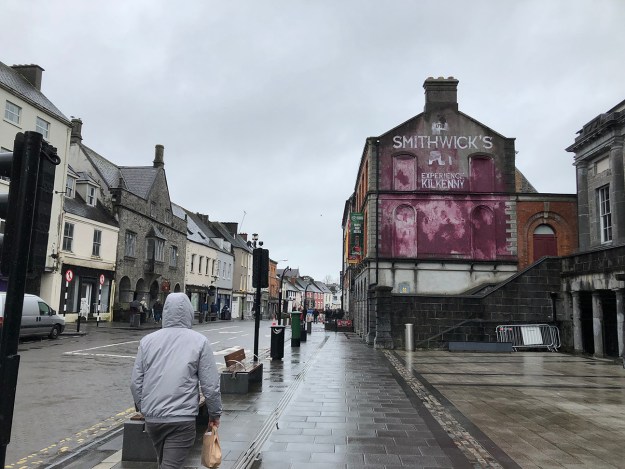