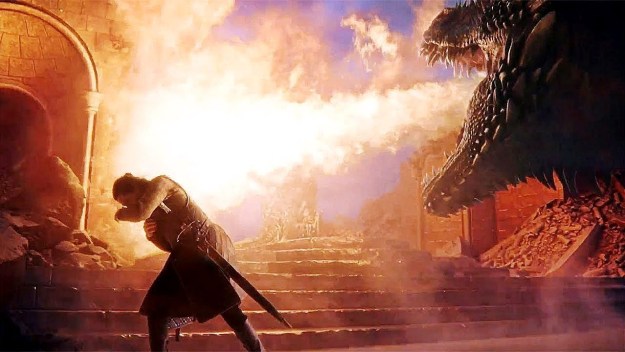 Burning the Iron Throne: An unusually subtle move, for an angry, bereaved dragon.

Over the last couple of weeks, as we waited for the finale, I read a bunch of stuff written by people with serious perspective issues. So it is that my favorite thing written so far about the last episode is this:

It’s likely you’re already aware of the dissatisfaction with the conclusion tweeted hither and yon — six weeks of nitpicking complaints, first-class nerd whining and an ungodly amount of postgame analyses. Consider all those hastily posted diatribes or that pointless online petition with a million deluded signatures on it, demanding (demanding!) to have Season 8 scrubbed and remade. In some ways, “Game of Thrones” had grown so popular that it made its viewers look embarrassingly out of touch with life itself.

This can only happen when we love our popular culture a little too hard, crossing some line of personal investment, forgetting when a TV show is only just that. It was our fault for coming to regard the show as the apogee of the medium itself. It’s also why I’m glad some unnamed, unwitting hero left a coffee cup in the camera shot in the episode that aired May 5. That one coffee cup humanized the whole endeavor. It reminded us that a TV show, no matter how absorbing, is a folly, a fake, a job that someone is hired to do, so that an HBO subscription can be sold to you. The coffee cup will be scrubbed away with a quick flick of magic technology; but before it’s entirely gone, I hope they give it an Emmy….

Absolutely. And the plastic water bottle should at least get a nomination.

I hereby go on record as being one of the few who are satisfied with the ending, and happy to move on. About the only criticism I agree with was the rushed nature of the last two seasons. I guess it was just really hard making episodes that went beyond the original books, and this was all the show runners had in them. But it did make the tying up of loose plot threads seem a bit too hurried. Maybe if it had taken more time — say, the usual 10 episodes per season — there’d be less dissatisfaction out there.

Of course, while I am satisfied, I do have a few questions, objections and observations remaining. Here are some of them, in no particular order (SPOILER ALERT):