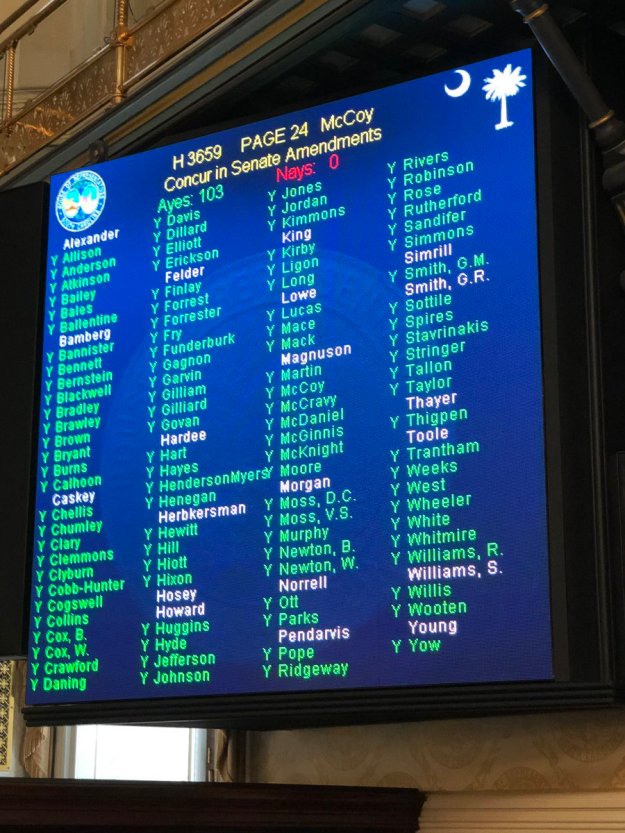 The unanimous vote in the House on Thursday.

And may I add, it’s a win for my erstwhile boss James Smith, even if he’s no longer in the Legislature to share in the celebration.

Last year, James’ bill to lift the cap on solar energy in our state was cruising to victory before the big utilities got the rules changed at the last minute. It was a stunning exhibition of “your oligarchy at work,” as one State House sage described it long ago. Check out my report on that, headlined, “In stunning reversal for people of SC, utilities manage to kill solar bill AFTER it passed overwhelmingly.”

Here’s Sammy’s story on what happened. An excerpt:

As the legislative session ended this week, South Carolina lawmakers approved a sweeping solar energy bill that will keep the state’s rooftop solar industry from collapsing and protect customers who seek to save money by installing sun panels on their homes.

The bill, the result of two years of negotiation between utilities and solar advocates, now needs only Gov. Henry McMaster’s signature to become law. McMaster spokesman Brian Symmes said the governor will sign the bill. The Senate voted for the bill Wednesday and the House approved it Thursday, the final day of the legislative session.

“We had a good deliberative process on some pretty groundbreaking clean energy legislation,’’ said Rebecca Haynes, deputy director of the Conservation Voters of South Carolina. “This saves the rooftop solar industry.’’

This week’s action is significant because it lifts restrictions that threatened to grind the state’s burgeoning rooftop solar industry to a halt. State law capped the amount of rooftop solar allowed in areas served by Dominion Energy and Duke Energy in South Carolina.

The Legislature’s action eliminates those caps, as well as restrictions on solar-leasing programs….

Well it’s about time. Congrats to Peter McCoy and everyone who supported it. Which was, um, everybody…