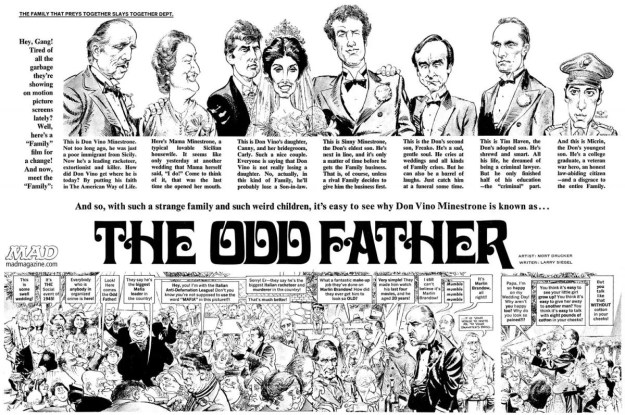 Our discussion earlier of MAD magazine caused me to say that my favorite part was the movie spoofs.

So I did a little Googling, and came up with the above, which epitomizes what I was remembering. I was trying to recall who the artist was who did the best of those parodies. I found out.

Mort Drucker is amazing (or perhaps I should say “was amazing,” since he’s 90 now and I assume retired). The very piece you see above is mentioned on his Wikipedia page, where a writer is quoted as saying, “The way he draws James Caan‘s eyebrow is worth some folks’ entire careers.”

Exactly. And check out his rendering of Barzini in the panel below.

Another thing from that page:

In a 1985 Tonight Show appearance, when Johnny Carson asked Michael J. Fox, “When did you really know you’d made it in show business?”, Fox replied, “When Mort Drucker drew my head.”[1]

Oh, by the way: I don’t expect people to know who Mort Drucker is for me to consider them to be sufficiently aware of the world around them. Alfred E. Neuman is an icon; Drucker is more esoteric. Just for those keeping score.

If you’re confused about where the line it, just ask me; I’ll tell ya…