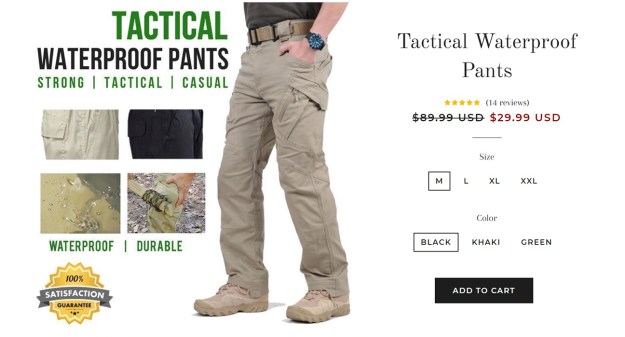 Actually, I’m sort of forcing the indignation there. They think men are about as stupid as they actually are. The fact that AR-15s, which allow grown men to pretend they are bada__ soldiers, sell like hotcakes proves that point.

Lately, I only see the kinds of commercials I used to see on television in three places — on YouTube, on Hulu and on game apps on my phone.

A couple of times lately on one of the apps, I’ve been fed an ad for something called — and I am not making this up — “tactical pants.” I don’t know what that means. Perhaps they have a special zipper that helps you pee from a defilade. Or something.

But the part that really drives home the stupid is the video bit where the guy looks like he’s trying to stab himself in the crotch with a sharp knife. See below.

Oh, yeah, I need me some of those…

Actually, wait… $29.99? That’s pretty reasonable for a pair of really sturdy pants. And you say they’re waterproof?… Well, then, let’s not be so quick to scoff…

10 thoughts on “‘Tactical pants?’ How stupid do they think men are?”