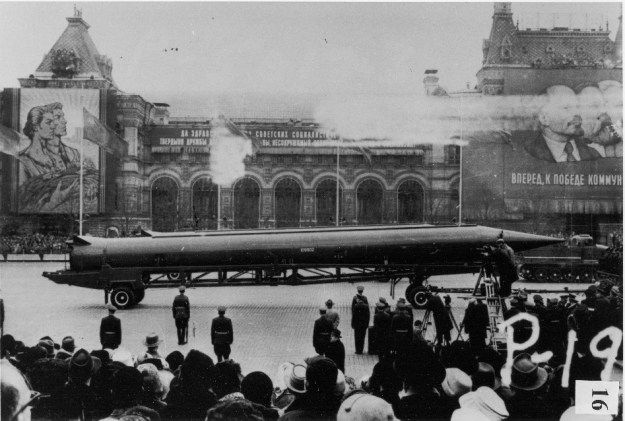 CIA photograph of Soviet medium-range ballistic missile in Red Square, Moscow, some time between 1959 and 1968: It really DOES look like a giant pencil, doesn’t it? A freshly sharpened one….

Just noticed that a piece in the Charleston paper over the weekend made reference to something I wrote last week.

The Post and Courier piece was headlined “Where does South Carolina’s teacher labor movement go after 10,000 person march?” (They left the hyphen out of “10,000-person,” not I. Y’all know I love hyphens. And commas.)

“May Day? Really? Are we thinking of the State House grounds as Red Square?” opined Brad Warthen, a former editor at The State who worked as a spokesman for Democrat James Smith’s failed gubernatorial campaign in 2018.

As for the choice of date for the first protest action, Walker said her group chose it to stand in solidarity with North Carolina teachers, who were marching on their Statehouse the same day. She said she hadn’t heard of May Day or its socialist connotations before critics brought it up online…

Yeah, exactly. They chose it “to stand in solidarity” with workers elsewhere. Kind of what I was on about.

Before someone gets worked up: No, I don’t think the teachers are commies. Apparently, this one doesn’t even know about commies.

I’m all for the teachers. I’m all for public education. Always have been, the record will show.

I’m just saying what I said: That this is not a way to win friends and influence people — at least, not the people who make policy in this GOP-dominated state. While few enough among them remember the Cold War, one assumes it lurks somewhere in their collective unconscious (as much as they might deny, upon questioning, possessing a collective anything).

And especially not when the Republican speaker of the House has stuck his neck out trying to accomplish some of the things you say you want.

That’s all I have to say… except that I wish they’d quoted the part about the giant pencils. That was the good bit. The part they quoted was just the setup for the good bit. Ask Norm. He appreciated it, even within the context of taking me to task…

73 thoughts on “Yeah, that was kind of what I was on about…”