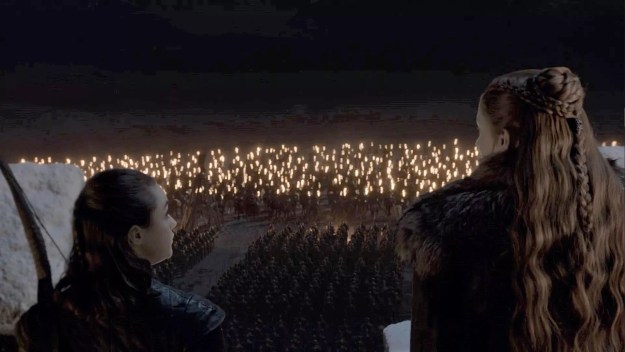 Um… are we sure this is the best way to use our cavalry?

Dang, y’all — I wrote this the other day (after “The Long Night” and before the new episode that aired Sunday night) and thought I had posted it, but I hadn’t. I still think it’s a fun topic, so here you go.)

Whoa! Was that the most intense episode in 8 years or what?

As storytelling, I thought it was wonderful. The show-runners have really hit their stride. And I hope I won’t upset George R.R. Martin fans too much when I tell the truth: The show has gotten much more enjoyable since it got out ahead of his books.

For the first few seasons, I had the complaint I so often have had about the best shows in this Golden Age of television — whether it’s “The Sopranos,” “Breaking Bad,” or GoT, I’ve had trouble finding characters to like and/or root for. (Although none of them were as bad in this respect as the execrable “House of Cards.”) There was nobody to care about in Breaking Bad (except maybe Hank toward the end), and the other shows were almost as bad. Everything was dark, and there was no one to admire.

On GoT, if you started to care at all about a character, he or she would soon be dead.

But it started changing over the last couple of years. And in the episode before the Battle of Winterfell, there were so many tender moments with characters you now care about — Tyrion, Jon, Dany, Sam, Arya, the Hound, Theon, etc., even Jaime — that it got downright mushy at times. Consider, for instance, the scene in which Lady Brienne is knighted — what she always wanted!

But this was a good thing, not cheesy. It was good that, with the Dead marching inexorably down from the ruined Wall, we all stopped to reflect on what was at stake — characters we cared about!

And the battle itself last week was one of the most suspenseful things I’ve ever seen. Yeah, you kind of knew some of the living had to survive this because somebody’s got to go after Cersei in the rest of the season. But the action kept making you think, well, maybe not…

But all that said, it’s a miracle it came out the way it did: Because Jon, Danny, Grey Worm and the other commanders had no idea what they were doing.

When the Dothraki got all excited over the Red Woman lighting up their weapons and charged off to their deaths as the opening move in the battle, did you go, uh, wait a minute?

The folks at The Washington Post did, and they asked military historian and GoT fan Jesse Tumblin what he thought, and Tumblin was less than charitable. After bemoaning the way artillery (the trebuchets) was wasted, he said:

Then there’s the issue of the Dothraki, who are “really fast and effective cavalry,” but they’re essentially sent to their slaughter.

“They’re the most mobile part of the coalition of living forces, and almost all conventional military thought would suggest that you would want to hold your cavalry in reserve for flanking maneuvers,” Tumblin said.

Instead, they put them right in harm’s way, leading a frontal charge on an enemy that’s many times the size of the living….

Tumblin said one thing was accurate, although ugly — the way the nonwhite soldiers (the Dothraki, the Unsullied) were sacrificed while the Westerosi were in the safest positions. There’s a long history of “colonial troops” being used that way.

Of course, in the end, we the living won, thanks to little Sis.

But can they afford to make such mistakes against Cersei’s mercenaries? I think not. We’ll see…

12 thoughts on “You know nothing about tactics, Jon Snow”