First, this is just plain hilarious, so enjoy.

Second, it’s relevant. As brilliant as Tina Fey’s impersonation of Sarah Palin was, it’s easy to forget how good a job Jason Sudeikis did with Joe Biden. And the Joe Biden that he was making fun of in 2008 is the same Joe Biden we see today.

It seems particularly relevant in light of Joe’s statements last week about working with everyone who will agree to help (even segregationists). What he was trying to say (which I understood perfectly, as did John Lewis and Jim Clyburn, although some people claim to be confused) last week was a lot like what Sudeikis’ Biden is saying about John McCain. I mean that in the sense of Joe’s ability to happily and cheerfully “hold two opposed ideas in the mind at the same time, and still retain the ability to function.”

Or in the sense of his willingness to disagree vehemently with someone, but still regard him as a fellow human.

It’s a message that’s counterintuitive for people who believe that left is left and right is right and never the twain shall (or should) meet. And that’s where the humor comes from in these lines:

Well, I would do what I have done my whole career, whether it’s been dealing with violence against women or putting 100,000 police officers in the streets. I would reach across the aisle. Like I’ve done with so many members of the other party. Members like John McCain. Because, look, I LOVE John McCain. He is one of my dearest friends. But, at the same time, he’s also dangerously unbalanced. I mean, let’s be frank, John McCain — and again, this is a man I would take a bullet for — is bad at his job and is mentally unstable. As my mother would say, “God love him, but he’s a raging maniac…” and a dear, dear friend….

In order to be hilarious, it’s exaggerated. But it also expresses something about who Joe Biden is. And America knows Joe Biden is this way, which is one of the reasons he’s been leading in the polls.

But whether you love or hate the way he is, whether you think it makes him a better candidate or disqualifies him, I thought you might get a laugh out of this look back. 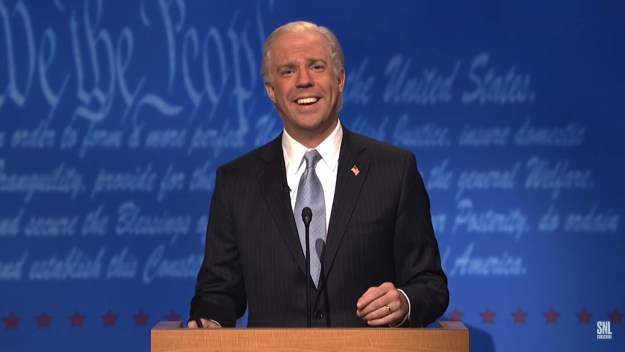 “As my mother would say, ‘God love him, but he’s a raging maniac…’ and a dear, dear friend.”