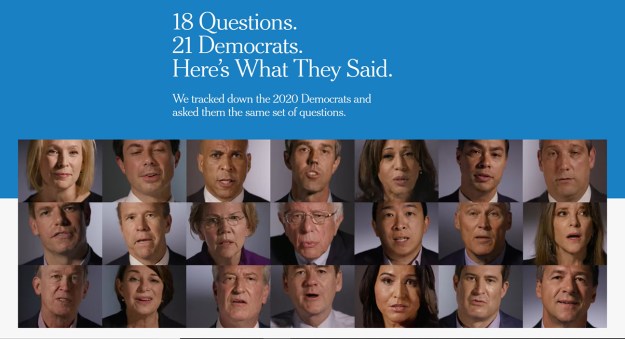 The New York Times put 21 candidates for the Democratic presidential nomination “on the spot” by putting them in front of video cameras and asking them 18 questions.

My man Joe Biden declined to participate. Make of that what you will. (I could write a separate post on why it doesn’t bother me, I suppose, but I probably wouldn’t persuade anyone who is bothered.) On the other end of the cooperation spectrum, Elizabeth Warren was the first to be interviewed and even came in a second time, because the NYT added some questions after her initial session.

I haven’t watched all the videos, or even most of them, because I have a life — and as y’all know, I don’t make electoral decisions based on this or that specific issue — and if I did, it wouldn’t be on many of these issues. But I’ve skimmed the accompanying story, which you might wish to do to save time.

How the non-Biden candidates answered the questions doesn’t interest me as much as how y’all would answer the questions. So here they are, each with a brief answer from me. The links take you to the video answers:

What’s missing: any serious questions about the chief part of the job of being president, which is dealing with the rest of the world. The one question about Israel is just a gut-check thing to test how you stand with the pro-Palestinian wing of the Democratic Party — and with a lot of this paper’s readers. And the “first international trip” question is somewhat vague, in terms of direct bearing on policy.

Nothing about China, or Russia, or Iran, or Venezuela? Or climate change? Or international organizations such as NATO or the U.N., or the defunct TPP? Or general philosophy on national or collective security? Really? Are you kidding me? What office do you think these people are running for?

That such questions are left out while time is spent on how the candidates “relax,” or their fave “comfort food,” just floors me. This is The New York Times, not Tiger Beat….

12 thoughts on “How would YOU answer these 18 questions from the NYT?”