Trump visited a church today after golfing. He was in Virginia. The shooting was never mentioned. And Trump said no words, was there a few minutes, then left. It was another PR stunt. Trump is beyond disgusting. Look at him smiling. pic.twitter.com/sknUsdxIMq

I saw yesterday on social media that people were giving Trump trouble for his appearance at one of those hopped-up megachurches. Something about his showing up in golf shoes, or failing to mention the Virginia Beach shooting, or whatever.

But hey, let’s give the guy credit for one thing: This is the first time I’ve seen a picture of the man in a decade or two in which he looks like he has hair that belongs to an actual earthling. No Flock of Seagulls or whatever you call that usual extraterrestrial do of his.

But however one describes it, it’s the most normal look I’ve seen on the guy in a generation. It’s humanizing. Admittedly, it’s not much, but it’s something… 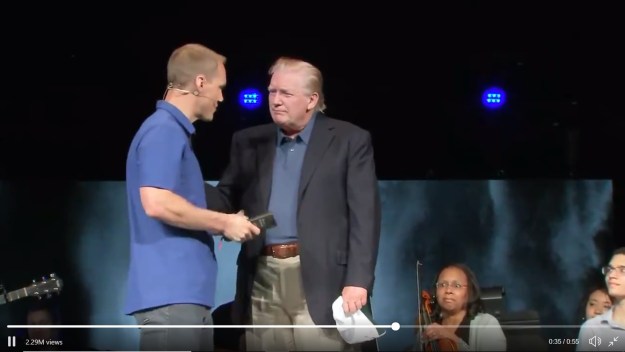 8 thoughts on “Oh, give him a break. At least his hair looked semi-normal”