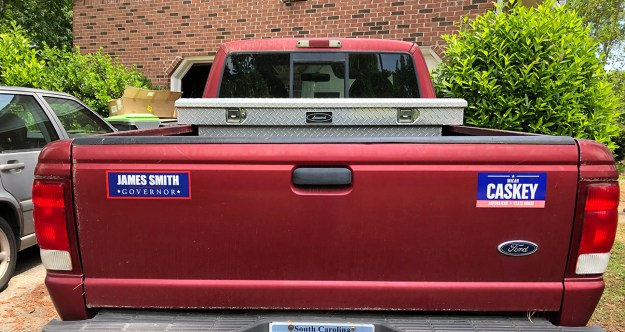 The above picture, which I posted randomly a couple of days ago, reminds me:

I need to figure out where to put my Joe Biden sticker when I get one. Which I expect will be soon. A couple of weeks back, I ran into my friends Sally and Mark Huguley. Mark was pulling up to the curb in front of St. Peter’s after Mass to pick up Sally, and Sally told him to pull up a few more feet so I could see the Biden sticker on the back of their vehicle.

I was, of course, envious. I need to reach out to Kendall Corley or Scott Harriford, two Smith campaign alumni who are now running the Biden operation in SC, to see if they can get me one. And a yard sign, when they’re available. Time’s a wastin’!

But then I look at the back of my truck, and think, where should I put it? I mean, it’s going to spoil my perfect bipartisan symmetry. All through the campaign, I had my James Smith sticker and my Micah Caskey sticker. And while I was a bit self-conscious parking it at HQ at first, that wasn’t my target audience.

My idea was this: Our single greatest obstacle to winning — and in the end, this is what defeated us probably more than any other factor — was that most white voters in the state have some kind of disability, a mental block. They are incapable of conceiving of voting for someone with a D after his name. They don’t think it’s a thing that a person can do.

If I could just get ONE voter, driving behind me, to think, “Whoa! This guy who votes for Republicans just like I do is also voting for James Smith. I wonder why,” then it would be worth any dirty looks I got from Democrats.

Oh, and if you think people don’t have thoughts like that, you’re wrong. Humans are hugely suggestible. Maybe they shouldn’t be, but the Bandwagon Effect is one of the most reliable factors in politics (as ridiculous as I think that is). If people see that other people are voting for someone, they are at least slightly more likely to do so themselves.

I know that some people noticed. The first time I had occasion during the campaign to meet with Democratic Party Chairman Trav Robertson, I mentioned something about my bumper stickers, and he said, “Yeah, I’ve heard about that.” And I thought, Yeah, I’ll bet you have. I knew by that time that there were some Democrats who didn’t like that James had hired someone like me, and it wasn’t surprising that some of them would have brought such a detail to Trav’s attention.

But again, Democrats weren’t my target audience. I was trolling for persuadable Republicans. (And yes, that’s a thing. Here’s one of our Republican endorsements, and a video to go with it.)

Anyway, now I have to figure out where to put my Biden sticker. My first thought is to put it right in the middle, but then my tailgate will be 2/3 Democratic. Which is not the effect I’m going for. But then, does that matter, since Joe is running in the Democratic Primary? I mean, what do I care what Republicans think in this context? Worrying about being perfectly bipartisan is more about worrying about what people think of ME, isn’t it? And that shouldn’t be a factor.

I could put it over the Smith sticker, since the campaign’s over and all, but I won’t do that. My experience last year is something I’m proud of, and I’m going to continue to wear it on my sleeve. Or tailgate.

Anyway, look how shiny and new it still is. It looks good. By contrast, Micah’s sticker has faded considerably.

Of course, being focused on the Democratic primary, I could just cover Micah’s sticker until after Feb. 9. But I’m not going to do that. I don’t want to abandon my representative, even for a short while. He’s got re-election next year.

So… I’m thinking the Biden sticker needs to go in the middle. And I need to get with Micah to get a fresher sticker sometime between now and next spring…

53 thoughts on “Where am I going to put my Joe Biden bumper sticker?”