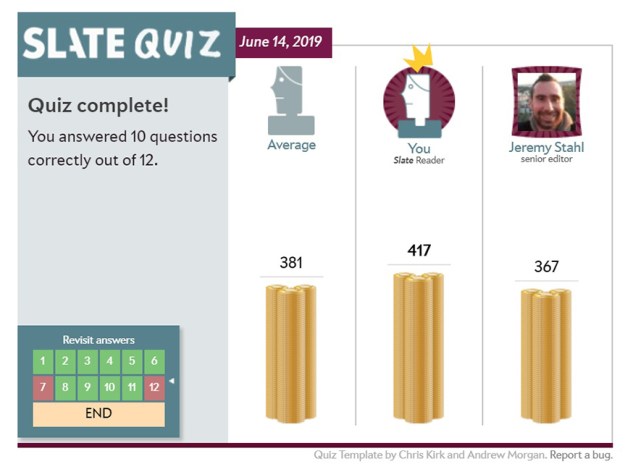 OK, so this was a pretty modest achievement. I got two questions wrong, which means that if this were a test in school I would have gotten an 83, which even by South Carolina’s currently overly generous grading system would be a low B.

But here’s the thing… Y’all know that I’ve always taken inordinate pride in my test-taking skills. That’s what got me through high school without studying, slacker that I was. (One of my favorite lines from Woody Allen’s “Love and Death” is when a fellow soldier, heading into battle, moans, “Oh, God is testing us!” and Allen’s character says, “If He’s gonna test us, why doesn’t He give us a written?” Yes! Why can’t all tests be written?)

But the Slate News Quiz is the kind of test that foils me time and again. Partly is that they have a penchant for trivial news over the top stories. But mostly because you get points for how quickly you answer, which rattles me. I hate being timed doing anything, and especially on something requiring thought. I don’t do anything fast.

So week after week, I get skunked on this quiz, humiliated by the Slate staffer they pit you against, or the reader average, or both. But not today.

You know why I did better today? I made myself slow down. I allowed myself that extra beat where I go, Come on, you read something about this, or when I don’t know, Which makes most sense?, or on less certain ones, Which of these names do you have a vague memory of having heard lately?, or more deviously, Which of these names wouldn’t be here unless that’s the one?

I took a hit on my score for taking time, but I got most of them right.

I even did better than “senior editor” Jeremy Stahl. Curious as I tend to be when these online publications call somebody a “senior” something, I looked him up. He graduated college in 2004, so he’s about 37. Which at least is older than I would have guessed.

And who knows? If the boy studies up, maybe he’ll beat the old man next time. You know how it was in the old Westerns: the top gun always has to be looking over his shoulder for the next punk looking to make a name for himself…