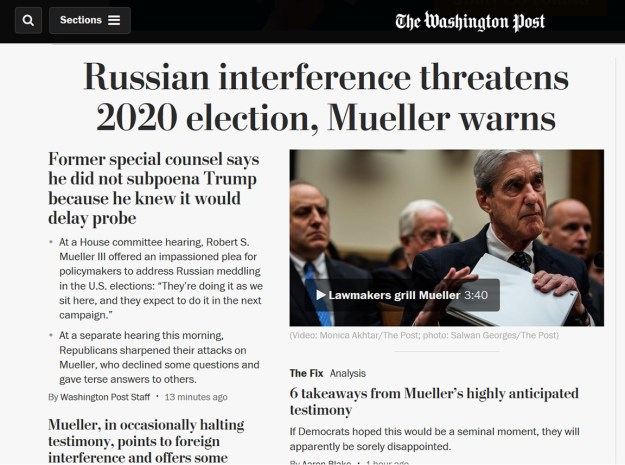 The first screen of The Post’s homepage was all Mueller…

At one point this morning, I Tweeted this:

For awhile, I’ve been glancing occasionally across the room to a screen showing the Mueller hearing with the sound off. I see his face and think, “Maybe we should all just leave this good man alone…”

But I wasn’t done with the Mueller hearing, or perhaps I should say it wasn’t done with me. There it was, wherever I turned — on social media, on the radio in my truck, even when I tried listening to NPR.org while I was getting some steps in in the middle of the day. (Fortunately, there were podcasts on other subjects.)

All of it was awful — the bits I heard, anyway:

I just want to fast-forward through this time in our history. I want to skim ahead to a time when Joe Biden has secured the Democratic nomination (and if the future holds something else, let me skim past the next four years of politics as well). No more enduring absurd “debates” with Joe on stage with a score of people, each of whom knows his or her way to victory lies through tearing Joe down, and not one of whom holds out much hope of doing what I think Joe can do — beat Trump.

Let’s just get on with it. Because the country’s one real chance of putting Trump behind us awaits us in November 2020.

Oh, and if you doubt that Joe is the guy to beat Trump, let me tell you about this one podcast I listened to while walking.

It was brought to my attention by this Tweet from Third Way, which seems to be published by Democrats who have not lost their freaking minds:

🔑”When you flip a voter, it’s twice as important as when you turn a new voter out.” –@Nate_Cohn to @mikiebarb.
This morning’s Daily episode is a must-listen for anyone who wants to beat Trump.https://t.co/gBVt3HTg0F

So I went and listened to The Daily, and I heard some home truths laid out, including the mathematically obvious one mentioned in the Tweet. None of it was mysterious or anything. It was stuff like this:

And the whole time I’m listening, I’m thinking the only thing you can possibly do if you have a lick of sense is nominate plain ol’ Joe from Scranton, PA.

And in fact, Michael Barbaro, the host of The Daily, finally has to just ask Nate Cohn — the guy running through the math — outright, So… you mean the Dems need to nominate Biden, right?

Cohn, if I recall correctly, was kind of noncommittal in his answer, but there really is no honest answer but this one: Right….