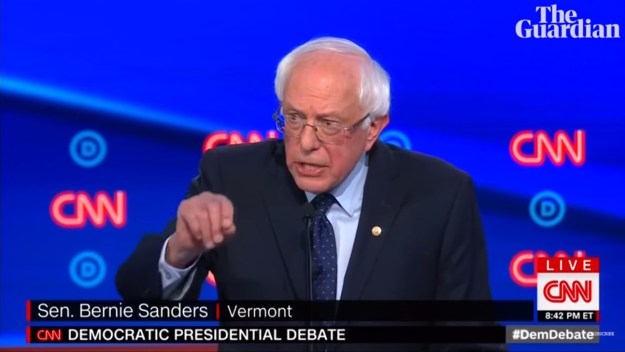 Here’s Bernie, seconds before he promised me my hearing aids…

My family thought this was hilarious.

It was during the televised debate on the night of July 31. I was together with most of the fam down at the beach.

I had said something dismissive about Bernie Sanders, as I am wont to do. Then, I was busy writing a Tweet about something that had just been said, so my mind wandered from the next thing that was said (a hazard of real-time commentary).

My wife, who was sitting on the side of my bad ear, said, “See what Bernie’s going to do for you?” And I said, “What?” and she said, “Didn’t you hear? He wants Medicare to pay for your hearing aids!” And because she was on my bad side, I said, “He wants to WHAT?”

And everyone thought this was hilarious. They weren’t laughing AT me; they were really… Well, no, they were laughing at me. But fondly…

They all know that I have declined to look into getting hearing aids because a) conventional hearing aids wouldn’t solve the problem I have, and b) I discovered upon going on Medicare that it won’t pay for hearing aids. And personally, if I’m going to have to scrimp and save for something that expensive, I’d prefer it to be something like another trip abroad, like the one we took to Ireland earlier this year.

So now that I know Bernie wants to pay for them, I’ve gotta like Bernie a little better, right?

Wrong. In fact, I find it extremely off-putting, the idea that someone out there is making a campaign promise to do something that benefits me, personally. No, it’s not like Bernie called me on the phone and asked what Brad would most like to see changed in Medicare and then promised to do that in return for my vote, but it sort of feels like it to me.

And I don’t hold with that sort of thing.

In the universe of politics, there are few things that I find more offensive than the idea of voting for someone because you think it would benefit you personally, or “people like you” (another concept I find offensive, which is all tied up with my objections to identity politics, but that’s a whole other subject).

First, I don’t like campaign promises, period. We’ve discussed this. I vote for the person I trust most to do the job, and I’d like to see that person as unencumbered by promises as possible, so that he or she can simply do the right and smart thing with regard to any issue that arises.

But if you’re going to try to sell me on a campaign promise anyway, you’d better come prepared to persuade me that it’s the best course for the country as a whole. Don’t insult me by saying how it would benefit me personally.

Yeah, I know, I’m sounding really self-righteous, priggish even. And I know that there are a lot of people out there who are NOT middle-class white guys who feel a need for the government to redress some wrong that hurts them personally, and/or “people like them.” And I’m not judging them. I can only speak for me.

And to me, it feels just a small step away from the days when candidates handed out free booze on Election Day. There’s just too much quid pro quo to it.

Don’t try to buy my vote. Not with free hearing aids, or lower taxes, or free drinks, or whatever other goodies you have in mind. I won’t take kindly to it.

I first became all high-and-mighty about this in 1976, when I was talking about the upcoming presidential contest with a colleague at the newspaper where I worked then, my first job out of college. I mentioned that I really liked Jimmy Carter, and she said she was going to vote for Gerald Ford. With real interest, I asked why. Not because I was demanding justification for a wrongheaded act. I liked Gerald Ford, and I could think of plenty of legitimate reasons that a person might chose him. I was curious which ones mattered to her.

I was completely unprepared for what she said, which went kind of like this:

Well, my husband and I studied the candidates’ positions on issues, and we sat down and did some math, and we figured out that if Carter were elected, we’d have to pay a thousand dollars more in taxes a year. So we’re both voting for Ford.

Not, I think Carter might raise taxes, and that might have a chilling effect on the economy, or even, I think Carter might raise taxes, and on people across the country who can ill afford it. No, she was talking about a very specific effect that she expected on her pocketbook. And on that basis, she was willing to choose the Leader of the Free World (we used to call the president that back during the Cold War, kids).

I’m pretty sure my jaw dropped, although I don’t think she noticed. I was shocked. I was scandalized. I couldn’t believe that anyone — much less a fellow journalist (people who love money that much generally don’t choose to become journalists, and if they do, they must have been seriously misled by somebody) could possibly sell his or her franchise in such a mercenary manner. I was even more shocked that she would tell someone that, and not show any sign of being ashamed of herself.

Sounds silly, doesn’t it? Didn’t I know people think like that? No, I didn’t. It had never occurred to me that people could. And even though I’ve seen a thousand times since then that her way of looking at things is WAY more common than mine, I’ve never ceased to be appalled at that point of view.

I would worry that by writing this I might insult a lot of folks out there, but I justify it by telling myself that those pragmatical souls are more likely to scoff at my utterly absurd, stuffy, priggish, and completely unrealistic notion of what politics is all about. They’ll see this post as embarrassing me, not them. And all the people whose opinions they value will agree with them on this point.

Anyway, it’s been preying on my mind that I should say something, because a lot of the Democratic candidates vying to go against Trump have a tendency to make the kinds of promises I don’t like to hear.

Meanwhile, all I hear Joe Biden promising is to save our country from Trumpism. Oh, he might have a few policy positions out there (because some people out there hound him into it), but I’m ignoring them, and that’s easy to do because his main message is the one I want to hear: He wants to restore the presidency, and the country, to something reasonable human beings can respect.

And if any of the other candidates want my vote (something I’m sure they sit up nights worrying about), I just want to let them know that I don’t want to hear any promises that would benefit me, Brad Warthen, in any way, shape or form. My conscience it just too delicate to put up with that, weird as you might think I am for saying it.

Don’t ever say I didn’t tell you that.

Yeah, I realize there may be more votes in a strategy of promising folks stuff than there is in a high-minded strategy of not offending Brad.

But I can only speak for myself…

26 thoughts on “Candidates, please don’t promise to do anything for me.”