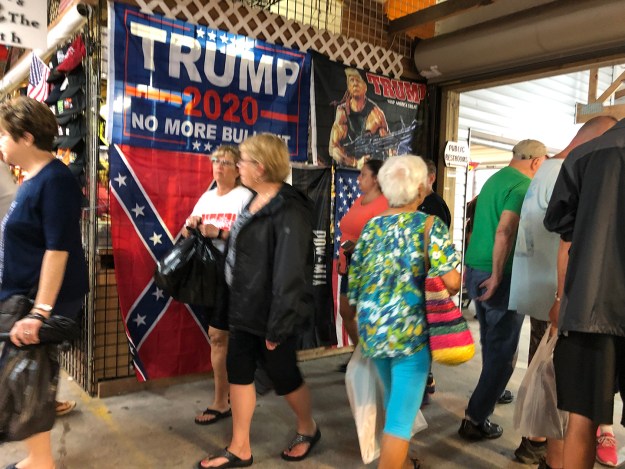 As funny as he found the MAGA-hat-wearing woman with the tight cutoffs, #GreenShirtGuy would probably have a stroke it he saw the image in the upper right-hand corner of the photo above. 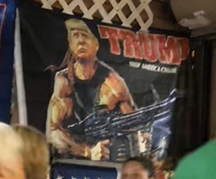 I suppose it’s meant to evoke “Rambo,” but this action hero would better be named “Bonespur,” I believe.

The one day it rained during my beach vacation last week, I accompanied some of my daughters and granddaughters to a nearby flea market. It was a revelation. Now I know where Trump fans get their red hats and other merchandise. (By the way, “MAGA” is now passé. The new hats say “KEEP America Great.” This shift is necessary to preserve the risible fantasy that Trump’s election somehow already made the nation “great again.”)

I found the banner to the left of the “Rambo” one particularly puzzling. Since Trump utters more lies — ridiculous, obvious, easily checked, embarrassingly transparent falsehoods — than any previous prominent political figure in American history, how on Earth would re-electing him in 2020 lead to “No More Bull___?” Is that some sort of campaign promise that a second term would be the opposite of the first?

I dunno. Anyway, in case you’re curious, there were a number of stalls stocked with Trump merchandise, but no, there was no other kind of political paraphernalia on sale at the sprawling market.

There may still be some of you out there who don’t know anyone who would vote for Trump. If you’d like to broaden your social circle, this is definitely the place to go…

9 thoughts on “#GreenShirtGuy would laugh his mustache off at this”