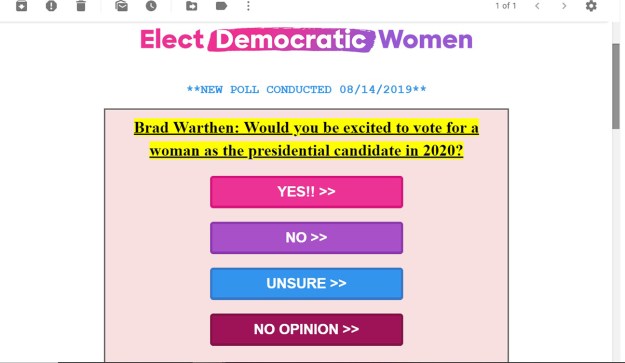 Maybe it’s because of my involvement with the campaign last year — a great experience that I wouldn’t trade for almost anything — that I keep getting these emails.

There are lots of them.

And they all make assumptions: First, that I am a Democrat. Well, I’m not. James and Mandy knew that. So do the subset of Democrats who are still ticked that they hired me. But the people who send these emails seem to be in the dark.

I try to be frank with them, occasionally filling out one of the “polls” that they invite to participate in. (I enjoy all the opportunities they offer to tell them that I do have a preference in the primaries, that’s it’s Joe Biden, and that no, I don’t have a second choice.)

Nothing I say, however, dims their enthusiasm for sending me emails that assume I’m a yellow dog.

Some of them assume I’m a feminist. Well, I don’t think I am, although as I’ve noted before, a friend once said I was a “difference feminist,” and there could be traces of truth in that, here and there.

But there’s one kind I am definitely not — I’m not someone who is going to be “excited” about voting for a woman. If I vote for a woman, something I’ve done plenty of times before, it’s not going to be some kind of cheap thrill. If I decide that a woman happens to be the better candidate, then I’m not going to feel any emotion about it that’s different from voting for a man if he happens to be the better candidate. (And isn’t that kind of the way you’d want it to be, if you’re a feminist?)

It’s hard for me to imagine it being otherwise. And it seems odd to me that it would be otherwise, for anyone. (And yes, it’s been explained to me that perhaps I lack the necessary personal plumbing to get it. But that still seems to me an odd basis for a political philosophy.)

I felt no emotion when I voted for Hillary Clinton in 2016. It was cold calculation. First, she satisfied the qualification of not being Donald Trump, and had the added attraction of being the only person on the planet in position to prevent him from becoming president.

She had some other positives. She represented in some ways the Third Way form of politics that I had liked so much back in the ’90s. And I thought she was the closest thing in the party to a Joe Lieberman on national security.

But excited? No. I was pretty cool about it…

3 thoughts on “Nor can I IMAGINE being ‘excited’ about it…”