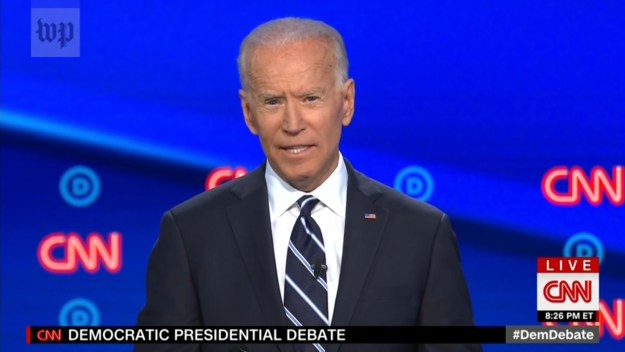 Last night I got a text from a friend and colleague in Columbia, asking “Are you watching the debate? I was looking for your twitter commentary.”

(Yes, some real people actually LIKE it when I riff on social media during these events, and miss it when I don’t do it. So there.)

But I wasn’t on the Twitters because a) I’m on vacation, and any time I spend on a keyboard is dedicated to something I just have to do for work or whatever (this post being a notable exception); b) it was my wife’s birthday, and we were having a family celebration; and c) having watched most of the debate the previous night (and Tweeted a bit), I was thoroughly fed up with this reality-TV mockery of our politics, and had no appetite for any more of it.

I had started Tuesday night willing to have fun with it…

I opened a beer so I could take a sip each time Elizabeth Warren says “fight.” This pint won’t be enough, will it?

…and ended up just disgusted:

No one can get through this and retain any dignity. And THAT’S the one quality America most needs right now in the White House…

So, even if I hadn’t been busy with more important things, I would not have watched Wednesday night with any, shall we say, gusto.

Anyway, today I’ve read a number of accounts of it, and I don’t think I missed much.

Here’s a summary: Joe did all right. That’s all that matters. He didn’t set the world on fire, but the consensus was that he wasn’t damaged and is unlikely to lose his dominant position in the polls — despite the increasingly desperate efforts of the wannabes to pull him down, extending to some really strategically stupid stuff like tearing down President Obama and his legacy.

For me, the only point in watching other than to make sure Joe’s OK would be to see if anyone emerges as a good backup option if he doesn’t make it. And that has not even come close to happening (based on my watching and reading). And not because my mind is closed. I’d like to have a backup plan. I don’t like not having a backup plan. I makes me uneasy. But I’m not going to lie to myself. I’m not going to pretend that someone else looks good just to ease my own mind.

Y’all know what I want. I look forward to the day that all this slapstick nonsense is over and Joe is the nominee and we can get on with the real business.

Anyway, what did y’all think?

30 thoughts on “Thoughts on the Democratic debate(s)?”