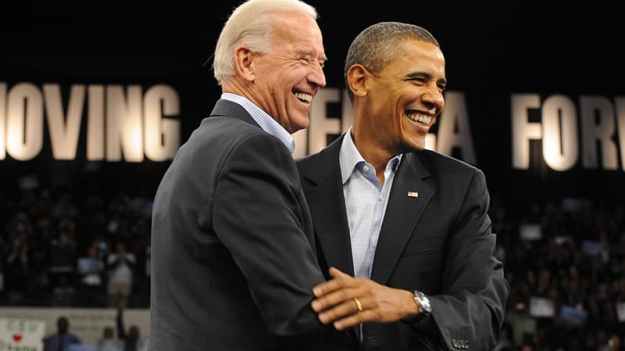 The once and future team?

I’ve had this idea kicking around in my head for weeks now, and I’ve been waiting to have time to present it thoughtfully, with extensive, carefully constructed arguments that will be perfectly unassailable, and I finally decided I’m not going to have time for all that stuff.

Joe Biden should promise to name Barack Obama as his secretary of state. Assuming he can talk his old boss into it. And assuming his old boss can talk Michelle into it, which could prove to be a bridge too far. But it’s worth trying (assuming it’s constitutional, which I think it is), for a number of reasons.

Joe’s campaign is all about restoring sanity in the White House — or saving the nation’s soul, as the former veep likes to put it. Just today, I was listening to an interview with him on NPR. Don’t be put off by the headline, which is “‘Details Are Irrelevant’: Biden Says Verbal Slip-Ups Don’t Undermine His Judgment.” It actually contains substance, rather than just more pointless yammering about trivial mistakes made now and then by a guy who talks all day. (I’m convinced that if the media adopted the same attitude toward other candidates — We’ve gotta watch him like a hawk to catch him sounding senile — they’d succeed in coming up with similar “proof” of the hypothesis.)

And one of the points of substance is about the heavy lifting that the next president will have to do to repair our relations with the rest of the world, restoring America’s status as a country that other countries — friends and foes — can respect.

“The next president is going to have to pull the world back together,” Biden asserts in the interview. And he’s right.

It’s hard to imagine a gesture that could more convincingly persuade foreign leaders of his seriousness and good faith on that point than to make the last president the world could respect his point man in dealing with the rest of the globe.

I find it hard to think of another living human being who could restore our nation’s dignity on the world stage as well as Barack Obama. And Obama could, by accepting the post, perform a more direct and dramatic service to the country in his post-presidential life than any president since John Quincy Adams served in the U.S. House after 1828. He would make a real difference in the world.

Not to mention how such a promise would make Biden more likely to be in a position to keep it. Some of his Democratic rivals have dared to quibble with the Obama-Biden legacy. But it would be really hard for them to make a winning case against an actual reunion of the party’s last winning team.

And no, it’s not the same as asking Obama to be his running mate. It’s far more substantial than that. I see it as being like the relationship between Lincoln and Seward. Seward was such a respected figure that when he was named secretary of state, many people mistakenly assumed he’d be the real president and country-bumpkin Lincoln would be a figurehead.

Obviously that didn’t happen, but nevertheless Seward was Lincoln’s right-hand man, a partner with real political juice of his own, helping our greatest president guide the country through its greatest crisis.

I think the prospect of Obama being secretary of state would change the whole tenor of the campaign from here on out.

And it would prove to be a very, very good thing not only for the country, but for the whole world…