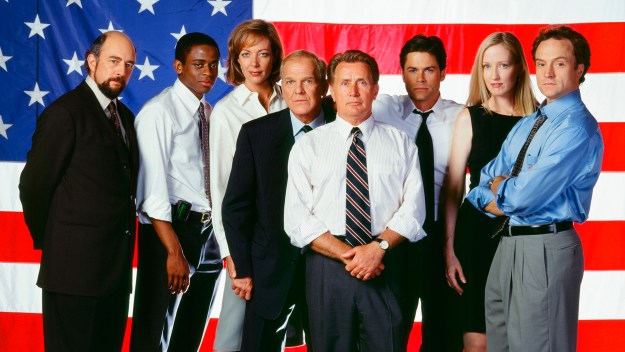 Saw this in the Post this morning. The headline grabbed me: “A modest defense of ‘The West Wing’.”

A “modest defense” of that which needs no defending? Anyone, especially any Democrat, who doesn’t love the show should be ignored. And if you do feel moved to mount a defense, there should be nothing modest about it…

So anyway, I read the piece, and was not mollified. You can tell why from the subhed: “The show was not perfect, but it’s way better than 2019 Democrats remember it.”

First, my scorn was engaged because the people who criticize the show are apparently the kids who think AOC is cool, and conventional postwar liberalism sucks. They’re the ones who have no tolerance of anyone who disagrees with them about anything. They look forward to getting 50 percent plus 1 so they can cram their policy proposals down the world’s throat, and they blame their elders for having thus far failed to do that. They’re the ones who, laughably, think they discovered social justice and are qualified to lecture people who were alive in the ’60s about it.

They’re the ones who…

I’ve been watching the new Ken Burns series about country music, and thinking about writing about it, pondering what I like and don’t like about it (for instance, it concerns me that it only seems interested in Country as an economic phenomenon, starting with the first practitioners to have success with radio and recording, largely ignoring the centuries of folkways that went before). But before writing about it, I was curious what others were thinking. So when I saw there was a review on Slate, I eagerly read it.

The reviewer also has a problem with it. The problem is that it’s made by Ken Burns, “and his compulsion to transform conflict and difficulty into visions of reconciliation and unity is vintage white baby boomer liberalism.”

Oh, give it a rest, kids. That constitutes an argument?

Anyway, it’s people like that with whom the writer in the Post is remonstrating, oh, so gently.

And again, it needs no defense. The only question is, is “West Wing” the greatest TV show ever, or does something else edge it out?

As I said before, the Top Five are:

At least, those were the Top Five, back in June. Since then, Bryan got me to start watching “Friday Night Lights,” and I’m really enjoying it (in spite of the, you know, football theme) during my morning workouts on the elliptical. In fact, I’m now in the middle of the 5th season, and sorry that it will be ending soon.

When it does, I’ll report back on whether it makes the Top Five. But I’ll tell you, “Breaking Bad” may be in trouble…

It’s great, and I’m really digging it, but will it make the Top Five?

29 thoughts on “If you don’t like ‘The West Wing,’ who cares what you think?”