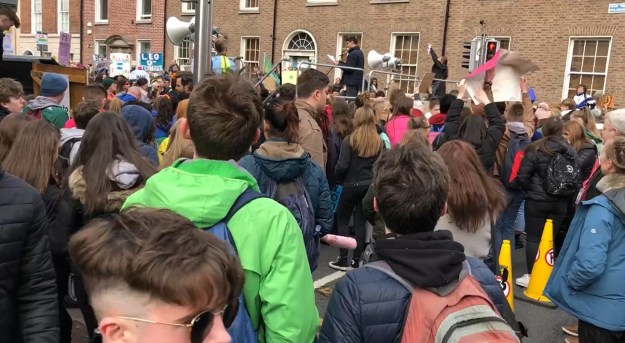 By the time we got there, the demonstration was fairly impressive.

You ever notice how some people have a gift for summoning up a situation in a few words, while other people will give you War and Peace in response to the simplest questions?

I experienced that walking down a street in Dublin back on the Ides of March.

There were all these kids walking toward a demonstration carrying signs. Groups of them were converging from all over the city, wearing the uniforms of the schools they were skipping that day. So I fell in step with a woman who was with group of particularly young ones, like fourth or fifth graders, apparently as some sort of chaperone, and I asked her what was going on.

She started telling me about this Swedish schoolgirl, who had started a movement, and now all these Irish kids were caught up in it, and that’s about all I could make out what with the street noises and the bullhorn at the actual demonstration site, which we were approaching, and the lady’s accent, and my hearing problems.

She could have just said, “global climate change,” but she was not so verbally economical. From the signs and what I heard in the next moments, I figured that much out. But I went the rest of the day wondering what some Scandinavian girl had to do with it.

Well, by the time Greta Thunberg sailed across the ocean, I had put two and two together. And now kids around the world have skipped school again for the same purpose, and Greta herself has delivered her message to the U.N., and it seems she’s really ticked off about it.

Anyway, I’m all up to speed now. 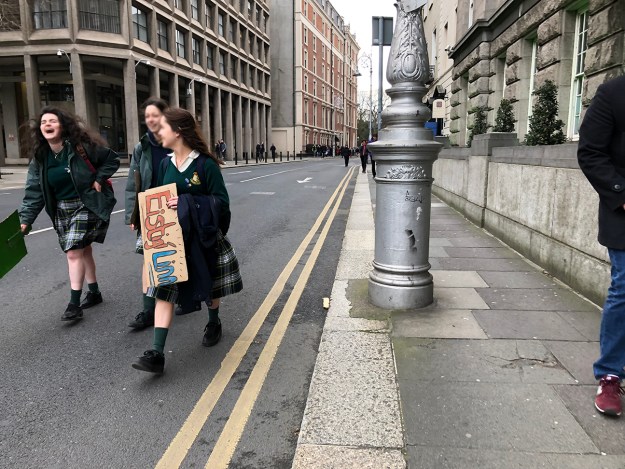 They kept coming, in groups large and small, from all over Dublin.

73 thoughts on “Oh, you mean THAT Scandinavian girl…”