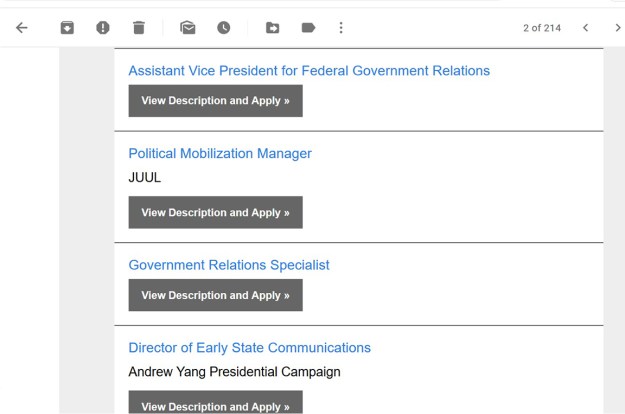 I previously mentioned the job postings I’ve been getting from this new source, called “Daybook.”

I’ve been enjoying getting them, because for once, I’m being sent jobs that would actually interest me if I were in the market. For some reason, the fact that I was a journalist who oversaw the coverage of politics and public policy for decades didn’t cause me to get postings like these. But apparently my having handled communications for James Smith was the previously missing ingredient.

Up to now, I’ve just gotten jobs having something to do with writing and editing. But the thing is, I was always more interested in what we were writing about than I was in the activity of writing. And this particular algorithm seems to get that.

So I look over these eblasts with interest — even when they’re jobs I’d run screaming from, like the “Political Mobilization Manager” for JUUL. Yikes. I hope that one pays well, for whoever takes it on. But there’s no question it would be interesting:

As a mobilization manager, reporting into the senior manager of campaigns, you will be responsible for establishing relationships with JUUL users and activating their voice to assist in accomplishing the company’s mission: to improve the lives of the world’s one billion smokers by eliminating cigarettes.

Working cross-functionally with various teams across the organization, including Digital Public Affairs, Communications, State & Local Affairs and Federal Affairs to identify opportunities for OTG advocacy efforts and growing the advocacy base

I was also, of course, intrigued by the position of Director of Early State Communications for Andrew Yang.